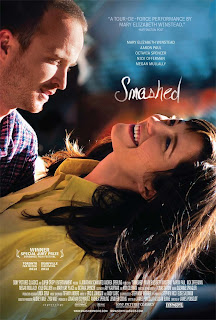 Alcoholism is one of those subjects that is difficult to film without veering into treacly territory. Robert Zemeckis managed to do it with both humor and pathos in Flight with the aid of Denzel Washington's extraordinary performance, but Alcoholics Anonymous meetings are hard to take seriously on the big screen, especially when they have been so often parodied.

That's part of what makes James Ponsoldt's Smashed so refreshing. Make no mistake, this is a Sundance film up one side and down the other, with all the quirky interludes with dippy folk tunes one would expect. But what separates Smashed from the chafe is how well it works around those interludes to create something that is actually emotionally fulfilling.

While it may seem like it's trying to be a one of those quirky indie comedies we see so many of, Smashed is surprisingly serious, and doesn't pull its punches in its depiction of the dangers of alcohol and substance abuse.

Even when the time comes to go to AA meetings, Ponsoldt doesn't hit us over the head with manipulative platitudes. It is a disarmingly sensitive and earnest portrayal of a woman at the end of her rope, anchored by a stunning turn by Mary Elizabeth Winstead, whose performance as an elementary school teacher whose hard drinking ways lead her into a web of lies from which she can't seem to escape. Her equally hard drinking husband (played by Breaking Bad's Aaron Paul), however, doesn't share her desire to get their lives back on track, and it soon becomes clear that their lives are moving down very different paths. Octavia Spencer also shows up in an underdeveloped role as a fellow alcoholic who agrees to be her sponsor.

Smashed treats its characters with dignity and respect, rather than as tools to manipulate the audience or as cartoonish figures to be laughed at. Nor does it take itself too seriously, so it doesn't completely disappear into the inherent sadness of its story. While it has an unfortunate tendency to short change its supporting cast, Winstead's performance is so fully developed and real that the film comes alive through her. She's magnetic even when the film veers into  Sundance territory, which to its credit it doesn't do too often. It takes on familiar trappings and techniques of the typical Sundance comedy and pushes them farther, into something more cohesive and satisfying. It overcomes its clumsiness with moments of such grace that its easy to forgive its occasional shortcomings. This may be Winstead's show, but Ponsoldt displays a remarkable restraint that demonstrates a keen directorial instinct. He may only have one other feature under his belt (the 2006 film, Off the Black, starring Nick Nolte as...an alcoholic), but Smashed positions him as a talent to watch.