Review | "How to Survive a Plague" 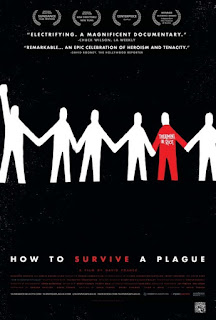 In the 1980s, the gay community was devastated by the AIDS epidemic in a way that no one could have ever seen coming. Millions would die over the course of the decade and well into the 1990s before education and medication was able to put the breaks on the disease and slow the spread of the epidemic.

David France's How to Survive a Plague is a chronicle of those turbulent years through the eyes of Act Up, an organization dedicated to raising not just awareness, but funds for AIDS research and demanding that pharmaceutical companies and the United States government do more to stop the plague.

It's an admirable goal, to be sure. The AIDS epidemic was met with resounding indifference in many circles due to ignorance, a lack of understanding, and in some cases outright hate. Act Up strove to fight that indifference by being too loud and too aggressive to ignore. But therein lies the rub.

﻿﻿﻿
Act Up is often so loud, so disruptive, and so obnoxious that one can't help but wonder how they made a difference at all. They were in your face, intentionally crude and irreverent, and often downright antagonistic. One could certainly make the argument that they had every right to be angry, that they were being ignored by the establishment while millions died, but I can't help but wonder if different tactics might have actually proved more effective in the long run. Disrupting church services, covering Jesse Helms' home in a giant condom, declaring President George H.W. Bush a "murderer" for failing to do enough, and throwing the ashes of loved ones who died from AIDS over the White House fence in protest seem like the tactics of the bullies they so loudly protested. They may have made people sit up and take notice, but did they really change hearts and minds? Or did the establishment cave in and listen just to make them shut up and go away?

France never explores these questions, and instead exalts Act Up without ever questioning its tactics. In fact, How to Survive a Plague almost feels like an official advertisement for Act Up, trumpeting their accomplishments while refusing to hold them accountable. France never asks what kind of impact their more militant actions had on the public perception of the gay community at such a critical juncture in the gay rights movement. At a time when gay rights were severely unpopular while taking baby steps toward mainstream acceptance, it would seem that such radical tactics would do little to assuage the fears many had about LGBT people at the time. Who would want to sit down and listen to a group of people who is yelling at you so angrily?

﻿
Did the ends justify the means? Perhaps. But one can't help but wonder if things would have gotten better more quickly with a kinder and gentler approach. It's a question worth asking that How to Survive a Plague completely ignores. I found much more to like and identify with in David Weissman and Bill Weber's beautiful documentary, We Were Here, which examined the AIDS crisis on a very personal level from the point of view of those on the front lines. How to Survive a Plague has no such emotional hook, and its protagonists are much harder to identify with. One can see why they're angry, but it's hard to get past such obnoxious tactics.

Bill Clinton had it right when he confronted an angry activist by telling them that their hateful attacks made them no better than the agents of intolerance that they railed against. I wanted the film to explore that angle, but it is a stone that is left disappoingly unturned. France clearly has an agenda, and while there's nothing necessarily wrong with that (this is an advocacy doc, after all), I thnk it would have benefited from a more balanced approach. The AIDS epidemic was a huge crisis whose repercussions still echo today. But what of those people who fought for recognition when the crisis was just beginning. 30 years later, you would think that we would have reached a point where we can examine its roots from all sides, how it came to be and how it was stopped. Instead we are saddled with this one sided documentary that focuses very much on the how but not so much on the why. Was there a better way? Perhaps. But How to Survive a Plague is not the film to ask those questions, and as such feels like a far more shallow experience than it really should be.

HOW TO SURVIVE A PLAGUE | Directed by David France | Not Rated | Now playin in select cities and On Demand.
Email Post