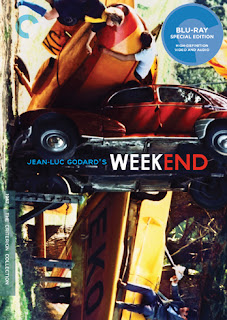 Jean-Luc Godard's Weekend marked a critical turning point in his career. It was the last film Godard would make before descending into his underground Maoist period that lasted until 1972, but from which he never fully recovered. There would be bright spots and and there, but the Marxist naval gazing became a dominant theme in his later work.

Released in 1967 to resounding indifference, Weekend was a film ahead of its time; an angry, revolutionary work that seemingly presaged France's political upheaval of May, 1968. Godard always had a political stream in him, but never had it come so ferociously to the fore as it did in Weekend.

It isn't so much a film as it is an angry screed, a political tract filled with rambling philosophies and didactic proclamations. But it is always, wildly, deliriously, thrillingly brilliant - a mad fever dream of ideas and Brechtian alienation that is as searing as it is unforgettable.

Our guides through Godard's bourgeois hell are Roland and Connie, an aloof upper-middle class couple who are planning on leaving their respective spouses for each other. But all is not as it seems with Connie. After confessing to a bizarre three-way sexual encounter to Roland (in an extended, passion-less monologue), the two head out on a road trip into the country, but not before having a violent confrontation with their next door neighbor over a small bump-up. On their way out of the city they encounter a traffic jam, and one of cinema's most incredible sequences - an extended tracking shot along a congested highway that lasts for over 10 minutes. It's a striking evocation of Godard's view of suburban French life, a neverending traffic jam of flaring tempers and glaring indifference. Roland and Connie drive right through the traffic jam, even nonchalantly rolling through the spilled blood of the accident victims that caused the traffic jam in the first place. They have no compassion and no time for anyone else but themselves.

The French countryside is littered with flaming wrecks and wandering philosophers, often historical figures like Emily Bronte (whom they casually set on fire). Amid all the death an destruction, they remain doggedly, almost blissfully self centered, more concerned with the loss of a Hermes handbag than the human toll of a fiery car wreck. As their journey becomes more and more savage, Roland and Connie become more disconnected from the world around them, eventually joining a marauding band of guerrilla fighters, further descending into this world of death and cannibalism.

The cannibalism is perhaps Godard's most explicit condemnation of capitalism, something he clearly holds in the highest contempt. What is often missed about Weekend, however, is its wicked sense of humor. It's sheer absurdity, from the non-diegetic music to the almost sarcastic title cards (at one point Godard throws up a card that reads simply "jump cut," a nod the element he had become famous for), Godard is not only lashing out at his audiences, his critics, and the world at large, he is offering up an absurdist comedy on a grand scale. "What a rotten film." Roland gripes at one point. "All we meet are crazy people." In true Brechtian fashion, the characters are completely aware that they are in a film, and Godard spends no time trying to provide any illusion. It is a political statement, first and foremost, but an endlessly gripping one.

Few but Godard could get away with placing a camera in front of someone eating a sandwich while someone off camera reads philosophy and the history of oppressed peoples. And while such tactics would not always serve Godard well in later films, they strike a chord here. Godard is experimenting fast and loose with the cinematic medium, and the result is a guttural howl of a film. Criterion's new blu-ray makes it look sharper than ever, while maintaining that very specific grunge that gives it such an earthy, rough-hewn quality. After all, it does tout itself as "a film found in dumpster," after all. While many will doubtlessly point to an earlier work as Godard's masterpiece, this for me will always be the pinnacle of his career. Here Godard stood on the precipice of a revolution, surrounded by a world gone mad in which he saw capitalism and imperialism run amok. The result is a towering and exhilarating piece of work that seems to embody the social upheaval of the 1960s in one bracing, often shocking, cinematic experience. It is the purest expression of Godard's worldview, and for one shining moment, he spoke for an entire generation.