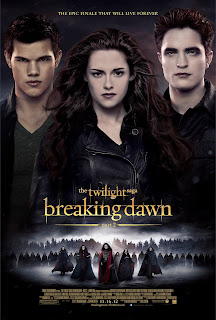 Jean-Luc Godard famously declared the "end of cinema" at the end of his 1967 masterpiece, Weekend. History will note that Godard had not yet seen the Twilight films.

The inexplicably popular series of vampire love stories aimed squarely at  teenage girls (and their mothers) has produced four books, five films, and millions of dollars in box office grosses and merchandising revenue, capturing the heart of countless fans around the globe. Yet despite its widespread popularity, it remains one of the most flagrantly pandering pieces of nonsense I have ever seen on the big screen. From the awkward Twilight the completely absurd Breaking Dawn - Part 1, the Twilight Saga has made a fortune off of catering to the lowest possible instincts and desires of its audience so egregiously that it makes Godard's proclamation of the "end of cinema" seem a few decades too early. These aren't films so much as carefully calculated products meant to stimulate raging hormones. Forget making any kind of sense or actually attempting anything resembling real emotion. The Twilight films are as cold as Edward Cullen's sparkly skin. And about as colorful too.

Things actually start off on a high note in the latest installment, Breaking Dawn - Part 2. The opening titles are a gorgeous mix of snow covered images and blood red lettering, recapping Bella's transformation into a vampire at the end of Breaking Dawn - Part 1, and set to a lovely medley of Carter Burwell's "Bella's Lullaby" mixed with snippets of Alexandre Desplat's beautiful theme music from New Moon. But then the movie starts and it's all downhill from there. Bella, now a vampire, must learn to hunt and ignore her hunger for human blood. Her daughter, the ridiculously named Renesmee (sure to be popular for a whole new generation of unfortunate babies in the coming years), is growing at an alarming rate with the help of some creepy looking CG effects that are unnerving in all the wrong ways. This alarms the Volturi, the sinister vampire governing body from Italy, who decide they finally have enough evidence of wrong doing to swoop in and wipe out the Cullens for good.

Determined to prove their innocence, the Cullens set out to recruit witnesses to attest that Renesmee is in fact a human child, not the demon spawn of ancient legend that the Volturi fear. Meanwhile, Jacob has imprinted on young Renesmee (a not-supposed-to-be-icky-but-totally-is version of werewolf romance), and has appointed himself her guardian. It all leads up to a (literally) earth-shattering climax that could destroy them all, that is if you can actually follow the action of the chaotic and incoherently edited final battle.

It is a testament either to the power of Summit's marketing team or the blind allegiance of its fans that the films have become so hugely successful while seemingly having so little regard for the quality of their product. For a while, Breaking Dawn - Part 2 actually threatens to be the best film in the series, even if "best" here is sort of like being the least rancid carton of spoiled milk, but it ultimately falls short of David Slade's not completely terrible Eclipse. To his credit, director Bill Condon actually seems to be trying to elevate the material into something more than it actually is, but he is thwarted at every turn by a story line that is impossible to take seriously and characters who are the very definition of uninteresting, leaving his more inspired directorial choices (Bella's heightened vampire senses are a nice touch) to be lost amid their increasingly dreary surroundings. This series has just never really translated well to film, and elements such as the vampires' lightning fast movements, while fine on the page, seem goofy on the big screen. Kristen Stewart's Bella, newly freed of her gawky human self to become a fierce and deadly vampire, still manages to spend most of the movie moping around, even if she's now doing it with redder eyes and a penchant for accidentally destroying things rather than biting her lip.

There is even surprisingly little resolution to the story, as the film crescendos in a "gotcha" moment that is as maddening as it is ludicrous (and had fans in my screening literally shouting at the screen), before simply refusing to end, passing by ending after ending in a way that makes The Return of the King look positively modest. When Edward talks so lovingly to Bella of "forever," I didn't think he was actually talking about how long the movie lasts. Breaking Dawn - Part 2 is less silly, perhaps, than its immediate predecessor, which may have been one of the most truly wacky mainstream films I've ever seen, but it isn't necessarily better. Just when you think the film is finally finding its footing, it hits another narrative roadblock. It's as if this series can't go 30 minutes without falling into some sort of unintentionally hilarious pothole. Its own internal logic is so scatterbrained and disjointed that it simply refuses to be taken seriously on its own terms. Nor should it, really. No film series with such a simplistic and borderline backwards view of love and relationships should be given nearly the consideration that this series is. The all-encompassing love of the emotionally abusive Edward and the passive, totally accepting Bella is not something for young girls to look up to, but here it is, served up on a golden pedestal as something to be striven for and celebrated. That makes the Twilight series not just inane and turgid, but dangerous. This isn't love, it's co-dependency, and Bella is willing to die for it. If this is the relationship model for a generation, then we really are screwed. Fans are certainly going to love this final chapter of their beloved series, and I freely admit to not being in its target audience. But when all the excitement has finally faded, the Twilight Saga is something best left in the dustbin of history.