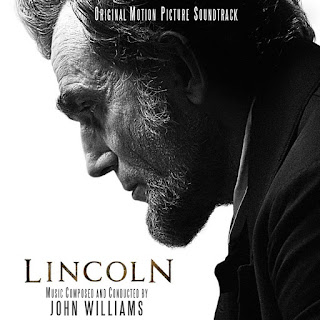 It's appropriate somehow that John Williams' Lincoln should be my soundtrack for election day 2012. The Steven Spielberg film chronicles the last few weeks in the life of Abraham Lincoln, who in the eyes of many (myself included) remains the greatest American president, and Williams' music pays loving tribute to a legendary man.

I had my reservations about the score early on. After the rather overbearing War Horse, I was afraid Williams and Spielberg would travel down that road of saccharine melodrama once again for Lincoln. My fears were assuaged, however, by my first listen to Williams' score, and finally in seeing the film itself last week. Both musically and aesthetically, Lincoln represents a complete turnaround from War Horse for both the director and the composer, and the result is something surprisingly restrained, lyrical, and heartfelt.

Williams introduces us to the noble main theme right out of the gate in The People's House. Starting out on solo oboe, the theme eventually swells to the rousing, Americana flavored hymn we first heard in the film's first trailer. Williams plays it closer to the vest, however, than this theme suggests, as this kind of grandiosity is rarely heard in the score outside of this initial performance and a reprise in the massive The Peterson House and Finale.

Track 3, Getting Out the Vote, is an interesting anomaly, a jaunty, Civil War-era type jig complete with dancing fiddles that lend a comedic tone to the characters played by James Spader, John Hawkes, and Tim Blake Nelson as they try to drum up support for the 13th Amendment among less that receptive congressmen. Track 4, The Blue and the Gray, begins with a period sounding piano lament that would have been right at home in Ken Burns' The Civil War, before segueing into some low range dramatic underscore. Track 5, 'With Malice Toward None,' is one of the score's highlights, and serves as a theme for Lincoln himself. It's a gorgeous theme, restrained yet noble, an emotional tribute to a great man that transformed America forever. The theme reappears on solo violin in another album highlight, Freedom's Call.

Williams incorporates some actual period music in Call to Muster and Battle Cry of Freedom, the latter of which was Lincoln's campaign song, and accompanies the passage of the amendment in the film. Ominous underscore dominates The Southern Delegation and the Dream, recalling moments from Saving Private Ryan, while The Race to the House provides more bluegrass flavored comedic jaunt.

The real emotional meat of the score begins in track 14, Remembering Willie, which ends in a haunting performance of the solo piano "war theme" first introduced in The Blue and the Gray. The war comes to an end with a chilling choral performance in Appomattox, April 9, 1965, and The Peterson House and Finale encapsulates all the score's finest moments in one 11 minute long suite. Williams closes things out not with a crescendo, but with a thoughtful rendition of 'With Malice Toward None' on solo piano.

Like the film, which focuses on legislative process and backroom deals, Williams' is score is a remarkably understated effort, and all the more effective for it. It may not stand with the maestro's greatest works, but it is certainly one of his strongest works of the past decade, along with Munich, Memoirs of a Geisha, and A.I. Artificial Intelligence. Even at 80 years old, Williams still has that magic touch that reminds us why he is the greatest living film composer. Lincoln is a gorgeous work that is certain to garner his 48th career Oscar nomination, and possibly his 6th win. 2012 has been a strong year for film scores, but Lincoln stands tall as one of its most towering achievements, and a tender, elegiac tribute to the man himself.