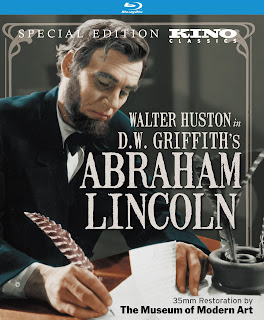 Arriving just in time to coincide with the release of Steven Spielberg's Lincoln, Kino Lorber's new blu-ray of D.W. Griffith's Abraham Lincoln couldn't be farther both tonally and thematically from Spielberg's film.

It's certainly interesting to have such a reverential biopic of the 16th president directed by a man who had directed the unabashedly pro-Confederacy The Birth of a Nation just 15 years prior. But for his very first sound film, Griffith chose to return to the era that had afforded him his greatest success. However, the lightning with which Woodrow Wilson so famously Griffith had written history with did not strike twice.

Elements of The Birth of a Nation are clearly evident in the film's climactic Civil War battle scenes, but here they seem like tired retreads, a master resting on his laurels. In some cases, Griffith doesn't even bother to change the camera angles or movements, simply recreating shots from a greater film made years before and adding sound. 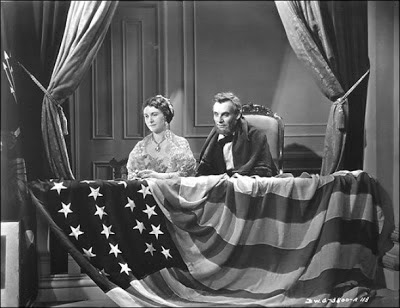 Griffith's sensibilities are firmly rooted in 19th century melodrama, which was perfect for silent film. But Griffith seems baffled by the new sound medium, and the result is a stodgy, plodding, and episodic "greatest hits" reel of Lincoln's life, told in exaggerated purple prose and stiff pontificating. In an introduction to The Birth of a Nation that was made while Abraham Lincoln was being filmed (which is included on the blu-ray), Walter Huston recalls that Birth of a Nation "had the fury of life in it...it made your blood tingle." But Abraham Lincoln has none of that fire. It feels like the work of a man who is just going through the motions, with no real passion for his subject (and in light of Birth of a Nation, it's not hard to see why), just an obligatory sense of respect. Even in the Birth of a Nation introduction seen on the disc here, Griffith continues to defend the necessity of the Ku Klux Klan to protect the South and the glory of the old Confederacy. Despite making Intolerance in 1916 to atone for the sins of Birth, he clearly never quite understood why his film was viewed as racist. Huston's performance, much like the film itself, is earnest but distant, lacking the humanity that Daniel Day Lewis now so memorably brings to the role.

It's unfair, of course, to compare this film to Spielberg's Lincoln. They are vastly different films by vastly different filmmakers separated by more than 80 years. But it is especially disappointing when one looks at the heights Griffith achieved during the silent era. Griffith is the father of modern cinema, whose techniques and stylistic innovations are now the standard we have all come to recognize. He would only make one more film after Abraham Lincoln before his death in 1948 at the age of 73. He left behind a legacy of great films that are still studied and appreciated by filmmakers and film lovers the world over (many of whom will rightly still find the film fascinating from a historical standpoint). But despite a fine HD transfer by Kino, from a 35 mm restoration by the Museum of Modern Art, Abraham Lincoln feels like a relic, a sad, weak swan song from one of cinema's most legendary filmmakers.