Review | "The Day He Arrives" 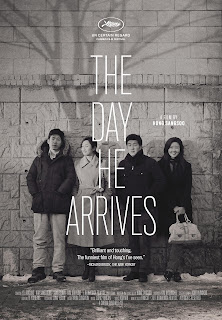 Whenever a film comes along whose main protagonist is a filmmaker, it's a safe bet to say that we're on pretty personal ground for the real filmmaker behind the camera.

However, when that filmmaker is Hong Sangsoo, any assumption is made at one's own peril, because Hong is a filmmaker extraordinarily adept at manipulating the ideas of time and perception. In Hong's universe, nothing is ever what it seems on first glance.

In his perhaps his finest film, 2000's Virgin Stripped Bare By Her Bachelors, Hong tells essentially the same story from varying points of view, deftly articulating the notion of different perspectives on one single relationship. "What is truth?" He rhetorically asks, refusing to give an answer. It is that sly sense of subversion that Hong brings to each film, and he has brought it once again to his latest work, The Day He Arrives.

This time, rather than taking on the ideas of truth and perspective Hong tackles the perception of time, yet The Day He Arrives feels, both aesthetically and thematically, like an extension of Virgin Stripped Bare. It's not just that they are both shot in black and white, or that they both feature filmmakers as characters, it's the way in which Hong constantly challenges the audience the question and examine what they are watching. The Day He Arrives takes place over the course of one day (or does it?), in which a filmmaker named Seongjun (Yu Junsang) travels to Seoul, South Korea to meet up with an old friend. When his friend doesn't show up on time, he begins to wander the streets, where he has a series of random encounters.

There is the plucky young actress who seems desperate to work with him. There is the group of young film students with whom he shares a drink. By the time finally meets up with his friend, Youngho (Kim Sangjoong), it might be the same day, it may be the next day. It doesn't matter. They meet up with a film teacher, Boram (Song Sunmi), and share drinks at a bar where the proprietor seems to be perpetually absent. Seongjun plays the piano and asks the bar proprietor out for a drink. As these seemingly mundane events take place, time seems to dissolve away and events begin to repeat themselves and blend together. Whether it is a day or the impression of a day no longer matter, as Seongjun begins to take stock of a life that isn't going quite the way he planned.

Having not made a film in several years, Seongjun is at a crossroads in his life, and the day he arrives in Seoul will make him take stock of where he has been and where he is going, of coincidences and fate, of the difference in stagnancy and motion. Hong skillfully weaves these themes together in a surprisingly light and humorous manner, punctuated by an inescapable feeling of melancholy and loss. Seongjun's piano interludes, in which he hammers out Chopin's "Nocturne in C-sharp Minor" on an out of tune piano, become a kind of stirring glimpse into his mind and his own sense of ennui. The film somehow seems to exist out of time, as if Seongjun has somehow stepped into a vortex where time no longer has any meaning. Time stands still just as much for the audience as it does for Seongjun. Has he only been in Seoul for a day? Or was he there for several days? Does it really matter? When his life has no direction, the days run together in a blur that seems to be caught in a neverending cycle.

It is part of Hong's genius that The Day He Arrives doesn't really reveal itself in the moment. It is a film that reveals itself upon reflection, in hindsight. The cyclical events of the film play out life day-to-day trivialities, small talk and fleeting encounters. But when the sum of the film is totaled it becomes something far greater than its parts. Hong is beguiling us, lulling us into a kind of complacency akin to the character's own, before revealing its treasures in a revelation that its protagonist may or may not ever have. It handles a surprising amount of thematic richness in its bare bones structure, and Hong conveys it with both elegance and grace. On the surface it may seem like a trifle of a film, a throwaway exercise in naturalism that ultimately leads nowhere. But in true Hong fashion, its simplicity is the ultimate deception, and for those willing to take the challenge, exploring its riches yields great rewards.