Review | "The Names of Love" 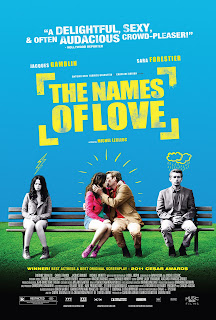 The Names of Love is one of those French comedies that wears its intentions on its sleeve. It wants to be Amelie but comes off more like Micmacs - strained, false, and completely lacking its own personality.

It's really one of the most bizarre viewing experiences I've had in a while. One gets the feeling that director Michel Leclerc never quite knew what to do with the film, whether it's a comedy, a social commentary, a serious exploration of racial politics in modern France, or a strange amalgam of all of the above.

At its core it's a pretty typical opposites attract romantic comedy wherein a young, left wing activist named Baya (Sara Forestier) who spends her time sleeping with right-wing men in an effort to convert them to her cause. At the opposite end of the spectrum is Arthur Martin (Jacques Gamblin), a white bread lover of the status quo who pays lip service to liberal causes by supporting left wing presidential candidates without a prayer of actually being elected ( while Baya has a rather irritating habit of accidentally voting for the wrong candidate).

Baya comes from a mixed background, with a firebrand French left winger for a mother and an Algerian refugee for a father, while Arthur's mother is a Holocaust survivor and his father is a nuclear engineer. Baya embraces her "otherness," Arthur tries to hide it, preferring instead to fade into the background of French society. It's an odd mix, but the two find a way to make it work, and in the process run up against cultural prejudices and racial identity as they try to navigate the waters of an ever changing France.

The problem is, those themes get muddled in a banal, faux-quirky comedy that never figures out what it wants to be. The Names of Love has no personality of its own, favoring instead an incongruous pastiche of styles and ideas that never quite mesh. Stylistically, the film is mostly anonymous, striking a problematic and even schizophrenic tone that lurches between dippy comedy and serious cultural commentary.

The characters are also wildly inconsistent, despite fine performances, especially by Forestier (who received a Cesar Award for her work here), who is wholly believable as a naive political activist who lets blind dogma blind her to reality. She's a perfect parody of the kind of blind, idealistic young liberal who is just as close minded as the conservatives she rails against, and I wish the film had spent more time showing that dichotomy between people of two extremes who are both in fact everything they claim to hate in the other side. Sadly, Arthur is far too bland of a character for that. He's a milquetoast bureaucrat with no real ideas of his own, sort of like this film, whose message is lost amongst a sea of conflicting and half-developed ideas.

It's a mildly enjoyable film in the moment, but that's all it is - a film of surface pleasures. When one looks more closely, the gaping holes begin to show, and they're hard to look past. I wanted more from this film. The potential is there, but the underdeveloped plot never lives up to it. The script is riddled with narrative shortcuts and nonsensical changes of character that, while convenient for the story, never quite make sense. The Names of Love is every bit as anonymous and lost as its cartoonish, cookie cutter characters, who whittle down the cultural complexities of a diverse France into a stale and toothless romantic comedy.