Review | "Where Soldiers Come From" 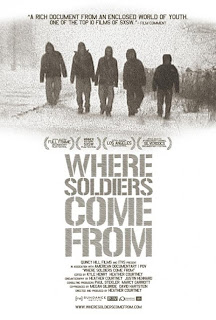 The September 9 release date of Heather Courtney's haunting new documentary, Where Soldiers Come From, is no coincidence. Here on the cusp of the tenth anniversary of 9/11, the film takes a hard look at its continuing legacy, as young men and women continue to go overseas to fight in wars that are a direct result of that horrific day ten years ago.

Specifically, Where Soldiers Come From follows a group of five friends, each one 18 or 19 years old, who sign up for the National Guard as a way to help pay for their education, only to find themselves shipped off to Afghanistan, where they spend their time hunting for IEDs to clear the way for the convoys behind them.

They are the children of 9/11, who would have been eight or nine when the planes slammed into the World Trade Center. They have barely known a world where the words "war on terror" haven't been played on the news every day. This is the world they grew up in, the world they know, and the film is every bit as much a tribute to them as it is a requiem for a lost generation.

Where Soldiers Come From has all the makings of a Hollywood war drama; five childhood friends all make a pact to enlist together, and end up getting shipped out to a war zone at the same time, while their families and lovers wait behind and worry on the home front, banding together for comfort and support. But this isn't a Hollywood fantasy, this is reality, and that makes it all the more poignant. Courtney introduces us to these young men before they ship out. They are young, carefree, innocent, even; the naive glow of childhood still hangs around them. At home, they are protected. Fresh out of high school, the world is their oyster - instead, they give it all up to serve their country.

When they return, they are haunted shells of the boys they once were. They are dark, brooding men, damaged both physically and psychologically by the trials of war. Some suffer from PTSD, others from traumatic brain injuries from multiple explosions of roadside bombs. It's a heartbreaking transformation, and by following their story from the beginning, it makes their evolution even more wrenching. We watch them change before our eyes, as the light in their eyes slowly fades away, replaced by the world weary, blank stare of a shell shocked soldier.

There is no political grandstanding here, no preaching or manipulation, just simple observation. Courtney films with the objective eye of a true documentarian and a genuine sense of earnestness. If there was any justice in the world, this film would be required viewing for all members of Congress, not necessarily to prevent war, but to remind them of the true stakes. There are plenty of anti-war docs out there, but this isn't one of them. Instead, it's a clear-eyed portrait of the true losses of war, and its effects on its most basic component - the enlisted man and the people that love them.

Where Soldiers Come From isn't necessarily comprehensive. Its scope is both limited and intimate, a quality that is both to its credit and its detriment. But it is very much an essential document of the times we live in. These boys could be from anywhere. They are our sons and our daughters, our brothers and our lovers. They fight for our freedom and pay for our mistakes, and not always out of patriotism or love of country, but to pave the way for a better life for themselves and the ones they love. It is a powerful reminder of what we've lost and what's at stake. This is their story, and Courtney makes sure that we won't soon forget it.

WHERE SOLDIERS COME FROM | Directed by Heather Courtney | Not rated | Opens Friday, September 9, in NYC, and October 7 in LA.
Email Post