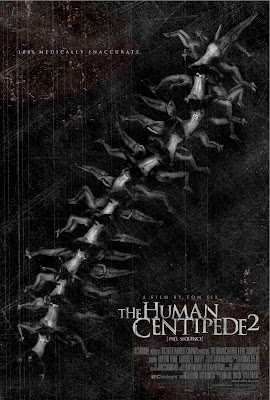 I've been covering the film out of morbid curiosity, but I actually saw the film this evening and wasn't particularly impressed with what I saw. The original film had some merit - was well composed and reasonably well executed, even if I never felt it branched out beyond its gruesome premise.

The sequel, however, simply wallows in its own filth. I'll be posting a full review in the coming weeks before the film is released. But for now, check out the admittedly creepy new poster that was released yesterday ahead of its premiere at Fantastic Fest in Austin, TX.

The Human Centipede II (Full Sequence) opens in select cities nationwide on October 7, and will premiere On Demand on October 12.
Email Post