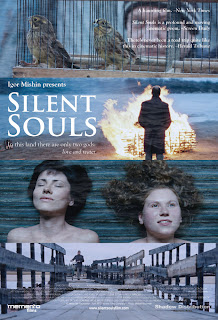 Film is perhaps the greatest tool we have for keeping cultures alive. The history books are littered with people and cultures that time has forgotten, their memories washed away and scattered to the wind; some without so much as leaving a trace. There are surely countless examples of cultures still unknown to history who have simply vanished, leaving behind no record of their existence for future generations. Their culture, their history, their oral record - all lost.

Since the advent of film, those cultures can be captured and documented, even those who are in danger of fading away into oblivion, and as such can live forever

Such is the premise of Aleksei Fedorchenko's somber Russian drama, Silent Souls, a film as much about fading away as it is about asserting ones existence.

In this case we are introduced to the Merjans, a Finno-Ugric tribe from Lake Nero in Western Russia. Long since disappeared, their traditions live on in their ancestors, and Miron has held on to his heritage fiercely. When his wife, Tanya, passes away, he reaches out to his best friend, Aist, to help bury her. The Merja burial ritual is long and complicated, but Aist agrees, and the two set out on a road trip with Tanya's body in tow, along with two birds in a cage as a kind of symbolic "canary in the coal mine."

In accordance with Merjan culture, the spouse of the deceased must share details of their love life while the body is still out of the ground as a way of keeping them alive, so Aist is forced to listen to uncomfortable stories of Miron and Tanya's sexual escapades. It is especially uncomfortable for Aist, as he was in love with Tanya too. And so these two men travel together, bound by the same woman, along with two birds and her dead body, to put the past behind them and keep traditions alive. It becomes a kind of surreal journey of the soul for both of them, and ultimately one of discovery.

Silent Souls runs a scant 75 minutes, but there is something strangely beguiling, even magical about it.  Fedorchenko pays homage to Tarkovsky with his slow pace and moody imagery, conjuring up a haunting sense of pathos and angst amidst a possibly futile attempt to keep lost traditions alive in a time when few care about where they really came from. That is essentially what this film is about - humanity's desperate and constant quest for immortality. But more intimately, connections across generations, across people, and sometimes to the person right next to you.

There is a poetic quality to the film that is hard to shake, even if the film itself never quite leaves a lasting impression. It's a film of great beauty, no doubt,  but it's never as profound as it seems to think it is, and the ending strikes a false note. It is one of those films that is fascinating, even gripping, in the moments, but fades quickly, much like the Merjans of the story. Perhaps that is what Fedorchenko intended, because Silent Souls is, in many ways, like the traditions and cultures whose virtues it extols - like a wisp of a memory just waiting to be discovered. It is a film worth revisiting, like a dream after waking, but an hour later you may not remember you ever had the dream at all.