Roscoe "Fatty" Arbuckle was one of the great silent comedians, and one of Hollywood's most bankable stars. He discovered Buster Keaton, who apprenticed under him before embarking on a hugely successful solo career, and mentored Charlie Chaplin while he was with Keystone Studios.

On Labor Day, 1921, Arbuckle checked the St. Francis Hotel in San Francisco with two friends, actor/director Lowell Sherman and cameraman Fred Fischbach. One of their rooms was booked as a party room, and several women were invited, including 26 year old aspiring actress, Virginia Rappe, who was later found seriously ill in Arbuckle's room by hotel patrons who heard screams. Arbuckle, the only other person in the room, claimed she had fallen ill. Rappe claimed "he did this to me." 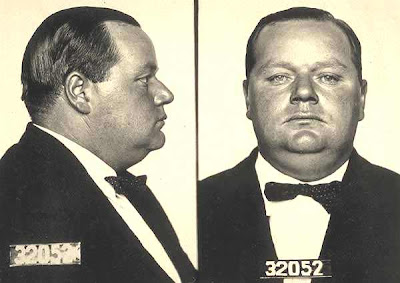 What followed was a media circus that rocked Hollywood and destroyed Arbuckle's career, despite being acquitted of the crime three times. Most of the lurid details of the crime, such as Arbuckle raping Rappe with a Coke bottle, were completely fabricated by a sensationalistic media, which came to define the trial in the eyes of the public. It helped perpetrate Hollywood's reputation as a den of iniquity for many, and in some ways destroyed its sparkling illusion of perfection and glamor, leading to the establishment of a Hollywood censorship board, who blacklisted Arbuckle (a blacklist that Buster Keaton would later help surreptitiously undermine). BBC News has a terrific retrospective on the scandal, offering a fascinating portrait on one of Hollywood's most infamous scandals.

"Everyone had believed the stars were covered in fairy dust. Now that illusion was shattered and studio bosses were terrified it would destroy Hollywood itself."

With no concern for prejudicing the trial, the sensationalist "yellow journalism" Press churned out lurid stories of Tinseltown's depravity alongside coverage of the case.

Although Arbuckle was never tried for sexual assault, this notion has endured, largely because of how the trial was reported at the time.

90 years on, and despite countless scandals and uproars, Hollywood has yet to see a scandal that rivals the sheer insanity, and tragedy, of the Arbuckle trial. Arbuckle is the subject of an upcoming (and overdue) HBO biopic starring Modern Family's Eric Stonestreet.