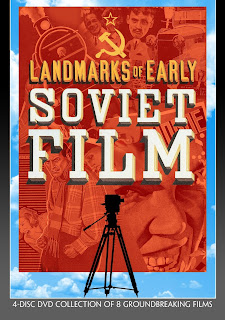 I've always had a soft spot for Soviet films, so Flicker Alley's new eight film box set, Landmarks of Early Soviet Film was like a little slice of heaven for me. Collecting four narrative films and four documentaries from some of Russia's most renowned directors, the set is a godsend for fans of Soviet cinema and cinephiles of all stripes.

There are some real gems of the period here that have long been unavailable on DVD. One of the most notable inclusions is the first film to come out of Lev Kuleshov's Cine-lab, The Extraodinary Adventures of Mr. West in the Land of the Bolsheviks (1924), a buoyant satire about an American businessman who comes to Russia with his trigger happy cowboy bodyguard in tow, expecting the Bolsheviks to be bloodthirsty barbarians. When a group of fallen aristocrats learn of his arrival, they pose as proletarians and kidnap him, in hopes of getting ransom money that will return them to their former lavish lifestyle. They are, of course, defeated by real Bolsheviks, and Mr. West learns that they aren't the monsters they have been portrayed as. It's clearly a propaganda piece (as were most Soviet films of the period), simultaneously poking fun at Americans and glorifying the Soviet ideal.

Kuleshov was actually a fan of American film, and the style of The Extraordinary Adventures of Mr. West in the Land of the Bolsheviks was patterned after American action films of the period, particularly the work of D.W. Griffith, whose influence can be seen in the cross cutting near the film's climax. Kuleshov is perhaps known for his "Kuleshov effect," in which he discovered that he could manipulate an audience by placing two completely non-related shots together that come together to suggest new meaning. He took the same shot of actor Ivan Mozzhukhin, and intercut it with various clips, causing the audience's interpretation of his emotions to vary wildly from shot to shot, even though his expression remained the same each time. Interestingly, Kuleshov didn't use his eponymous editing technique as much as his protege, Sergei Eisenstein, perhaps the greatest Russian director and the father of Soviet Montage. The Soviets championed the idea that editing was the most important aspect of filmmaking because it is what separated it from the other arts.

Eisenstein's particular embracing of the technique is on full display in Old and New (1929), the director's last silent film before his Siberian exile. The now famous scene in which Eisenstein juxtaposes footage of a newly working milk machine with a gushing water fountain is a kind of visual symbolism that Eisenstein employs frequently throughout his films, even if the overall effect here seems almost truncated when compared to his more passionate films like Battleship Potemkin and Strike. Originally conceived as an exultant demonstration of the Communist Party's plans for modernizing country life, Old and New began shooting in 1926 under the name The General Line, but was put on hold when Eisenstein was commissioned to direct October: Ten Days that Shook the World to celebrate the 10th anniversary of the Bolshevik Revolution. When he finally returned, the Party's policy was beginning to shift, and Eisenstein's grand vision of communal living was no longer in step with the government's vision, which was shifting away from revolutionary politics. Eisenstein was ordered to re-edit the film, and the result focuses more on the act of industrial progress, although communes still play a major role, which resulted in the film being booed by the press upon its release.

It is a theme that would pop up again in Dziga Vertov's Stride, Soviet! (1926), an early documentary that was made to demonstrate the achievements of the Moscow Municipal Council in the lead-up to the elections in 1926. More straightforward than his more experimental work, like his most famous film, Man with a Movie Camera, Stride, Soviet! is more overtly propagandist, contrasting old hardships with new social progress It is effective in its aims, but it makes for less interesting cinema since Vertov isn't so much interested in pushing cinematic bounds as he is drumming up votes. Which is perhaps why out of the four documentaries presented with this set, I enjoyed Mikhail Kalatozov's Salt for Svanetia (1930) the most. A glorious examination of the rural village of Svanetia, Salt for Svanetia is essentially a call for provential peoples to be brought into modernity and out from under the domination of local land barons and backward religious practices that waste their precious resources. But more importantly, it's a fascinating window into a vanished culture that no modern documentary could ever replicate. While it's clear than many of the situations in this "documentary" are staged, Kalatozov (who would later go on to direct such classics as The Cranes are Flying) handles the propagandist elements with greater subtlety than many of his contemporaries, summing up everything that I adore about these films - the rousing beauty, the almost naive passion; it's hard not to get swept up in it.

Even in Viktor Turin's Turksib (1929), the propagandist elements feel less overt even while hitting on the common Soviet theme of technological progress. A direct precursor to the muckracking documentaries we know today, Turksib focuses on the need for a railroad traversing the desert between the resource rich Siberia and the impoverished regions of Turkistan (a project that was a part of Stalin's first Five Year Plan). Turin is clearly influenced by the editing techniques of Eisenstein and Vertov, but he is less interested in grand political statements as he is a more personal look at the effect the railroad will have on the people, something that Eisenstein often missed in revolutionary fervor, where characters were often more symbols than people. The result was a surprise hit around the world, one of the few Soviet films that was greeted with praise by both critics and audiences.

On the opposite end of the documentary spectrum is Esfir Shub's The Fall of the Romanov Dynasty, which forsakes the on the scene immediacy of Turksib and Salt for Svanetia for a found-footage, newsreel style. Shub compiled footage from various sources (none of which was shot for the film itself) to chronicle the lead-up to WWI and the final straws that brought down the czarist government of Russia and led to the Bolshevik Revolution. Shub's work is perhaps the purest form of Soviet Montage, because it's all about the editing. Since Shub didn't originate any of the footage, editing was the only tool in her directorial arsenal, and she uses it to her ideological advantage. Shub uses juxtaposition to lay blame for the horrors of WWI at the feet of Czar Nicholas II, his government, and the religious leaders, while exalting the efforts of the Bolsheviks who overthrew them. Shub tells such a compelling story that it's almost hard to tell that she didn't shoot the footage herself. It all feels like it was meant to be together, and it makes for a fascinating viewing experience today, if for nothing else than as a historical document, even if it leaves out key details, such as the murder of the Czar's family by the Bolsheviks.

Shub's film is the ultimate form of realism, albeit with an editorial slant. By the time he made By the Law (1926), Kuleshov had put aside the affectations of American films for something more naturalistic. An adaptation of Jack London's short story, "The Unexpected," By the Law tells the story of five prospectors in the Yukon whose isolation leads to madness and eventually murder. While the surviving members of the team try to deal with the murderer according to the law (an ideal held to a high standard, even in the remote Yukon), they descend into paranoia and hysteria. While the film contains some of the more exaggerated performances that were a staple of Kuleshov's work, it's a remarkably grim and naturalistic work, dealing in a haunting sense of lonely dread. The score by Robert Israel included on the DVD release, however, is completely incongruous with the film, which is a shame, because Kuleshov's craft is impeccable.

My favorite film on this release, however, is Boris Barnet's The House on Trubnaya (1928), a delightful comedy about a young woman who, through a series of mix ups, ends up working as a maid in an apartment building whose owners refuse to treat her fairly, even after she joins a union. Barnet deftly mixes social commentary with farcical elements, making it less overtly propagandist than many of its contemporaries. It still retains some of the experimental elements of Soviet Montage mixed with a charming and humane comedy with an unmistakably socialist conscience. It is, in many ways, the perfect marriage of everything the Soviets did best, never overstating any of its elements. It's political without being outright propagandist, it's funny without being overly bizarre. It's simply a lovely film, and perhaps the finest Soviet silent comedy (an admittedly small genre).

The presentation by Flicker Alley is stellar, even if some of the films are a little worse for wear. The Fall of the Romanov Dynasty especially looks like it was transferred from VHS and the intertitles look like Jeopardy questions.  While several of the films would benefit from a full-on restoration, we're lucky to have them on DVD at all, and this set is a veritable treasure trove for movie lovers. Included with the set is a highly informative booklet that details the history and production of each film, providing each of them with their proper historical context. While the DVDs themselves have no special features, it's serendipitous that this set was released so soon after Kino's excellent blu-ray release of Eisenstein's Strike, as the special features there spend quite a bit of time discussing some of the films included here. It's a stellar and essential release, offering a tantalizing glimpse into an exciting era of film history that has paved the way for many of the techniques we take for granted today. This is truly a release to be celebrated.