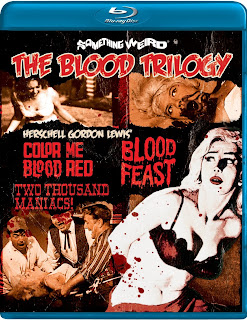 Herschell Gordon Lewis may have been the ultimate cinematic huckster hack, but he did at least give us one thing - the gore film. An exploitation filmmaker in the purest sense, Lewis cut his teeth on "nudie cuties," a bizarre subgenre of nudist camp films that circumvented censorship by portraying commonplace, non-sexual nudity but nevertheless drew in a crowd seeking titillating thrills.

The "nudie cutie" market eventually expanded, leaving Lewis to find some other kind of smut to peddle, which led him to the idea of gore, and Blood Feast was born in 1963, eventually earning Lewis the title of "Godfather of Gore" (a moniker he shares with Lucio Fulci, who he isn't even in the same league with).

Before Blood Feast, no one had seen that kind of graphic mutilation on screen before. What movies such as Psycho (1960) had merely hinted at, Blood Feast reveled in, although the bloody effects are hardly realistic and even by the standards of the time are pretty hokey.

The film tells the story of an Egyptian cultist named Fuad Ramses, who makes sacrifices to ancient Egyptian gods by mutilating nubile young women. That's pretty much it, because Lewis never had any intention of anyone coming to see his film for the plot. He was a sensationalist, and little else. Watching Blood Feast today is actually pretty entertaining, in a Mystery Science Theater 3000 sort of way, because it's often hilariously inept. The sound was recorded in-camera because they couldn't afford microphones, and as such tends to fade in and out. Not that you'll miss any important dialogue (delivered by some of the most laughable performances ever captured on film), but the script is its own unique brand of special. Nearly everything about Blood Feast is completely wrong - the blocky cinematography that never seems to capture what it's supposed to be looking at could almost be called avant-garde, while the acting almost makes Ed Wood films look like Academy Award winners. It's a strange choice for a blu-ray release, but it looks as good as an ugly movie can look in high definition.

Herschell's follow-up, Two Thousand Maniacs! (1964),  is a bit more ambitious, conceptually, but the execution is perhaps even worse. Those who have seen Grindhouse will instantly recognize the bad splices and overlapping edits, where characters start a sentence, only to have Lewis cut to another shot of them saying nothing in middle of that sentence, and then start a completely new, unrelated sentence. In Two Thousand Maniacs, a group of northerners stumble upon a small southern town whose yokel citizens want to turn them into mincemeat in celebration of their town's centennial. Unlike Blood Feast, the actual concept has potential to make a good horror film, but under Lewis' direction the result is perhaps even more nonsensical and illogical than its predecessor.

But just when you think it can't get any worse, along comes Color Me Blood Red (1965), which is perhaps the worst of the three films. The tale of a failed artist whose work is rejuvenated when he starts painting with human blood, Color Me Blood Red is filled with long spaces of filler (which, as Lewis explains in the commentary of Blood Feast, he used to inflate his films' running time), and ultimately leads nowhere. It actually looks the best on blu-ray of the three films, but it feels as if Lewis was running out of ideas by the time he got around to this one.

And while it may seem like I hate these films, I really don't. I appreciate their place in film history, even if as films they are undeniably horrible. Lewis is the cinematic equivalent of a sideshow carnie, an auteur of schlock who somehow stumbled his way into history by giving birth to a genre that would later spawn the likes of Saw and Hostel, not to mention countless films between. The blu-ray presentation is surprisingly good, despite the quality of the films, and the commentaries featuring Lewis and producer David F. Friedman are informative and entertaining (offering some fun anecdotes about the making and marketing of these anti-masterpieces). These films are a must for horror film collectors and and fans of grindhouse cinema. Students of film history will also find plenty to enjoy here, because no matter how bad these movies are, they're great fun to watch, if for no other reason than to laugh at their sheer ineptitude. The Blood Trilogy is a piece of cinema history that will never be remembered as a great contribution, but it;s an important contribution. Who would have thought that movies this bad would have such a resounding influence?

Out today on blu-ray from Image Entertainment.
Email Post