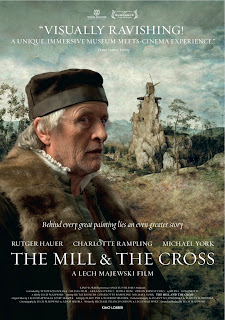 Basing a film off of what is essentially a novel-length art  essay may sound like a strange, if not downright impossible idea. There are few propositions that sound less cinematic, but Polish director Lech Majewski took on the challenge and created something that combines art and cinema in ways we have never seen before.

That doesn't mean that it is entirely cinematic - it isn't. But it's still a fascinating experiment that invites audience members to literally step inside a painting, and observe the artist's artistic process from within his own mind.

The painting in question is Peter Bruegel's 1564 masterpiece "The Way to Calvary." Bruegel (Rutger Hauer) was a 14th century Flemish painter/philosopher who lived under the brutal rule of the Spanish, a theme very much at the forefront of "The Way to Calvary." What distinguished Bruegel, however, is that the subjects of his paintings were often hidden, lost amongst a teeming throng, illustrating the human tendency to overlook that which is most important. In this case, Jesus carrying the cross to Calvary.

The Mill & The Cross is something like a mashup of art history lesson and film, but it's the most immersive art history lesson you'll ever see. Through the use of blue screen, Majewski has painstakingly recreated "The Way to Calvary," inserting live actors into the painting itself. It's a technique that never quite looks real, but then again it's not supposed to. It's literally like watching a moving painting, and while the images often betray their blue screen roots, that element of unreality actually feels right.

Bruegel serves as our guide through his own imagination as he arranges each element. Majewski retains the essay-like qualities of his source material,  but he does so in a compelling and consistently entertaining way. The imagery alone is enough to keep the viewer entranced, but Majewski goes one step further, he invests the audience in the creation of the artwork. It is almost as if we are an active participant in Bruegel's craft. Majewski, who idolized Bruegel as  a teenager, clearly has a lot of love and respect for his work, and his passion is clearly evident on screen. His attention to detail mirrors Bruegel's, from the faithful recreation of the painting to his prominent use of sound, bring each and every aural element to the forefront. It is almost as if Majewski is enhancing that which the audience would often overlook, making a point similar to Bruegel's - that each element is important, but the most important things are often missed.

It is that attention to detail that makes The Mill & The Cross such a fascinating work. It deftly bridges the gap between art and cinema (both mediums of which Majewski is familiar), enhancing the meaning of Bruegel's work and making it easily accessible to those who may not have previously been familiar with it. It's the next best thing to taking an art gallery tour, because it really feels like walking through history. While there is no real narrative to speak of, Majewski instead chooses to focus on telling the story of the painting. He brings the work to life as a person who sees what few others can see. Majewski is like the world's most engaging art gallery tour guide, breathing life into stillness with a exuberant prose and infectious passion.

There is nothing conventional about The Mill & The Cross, and to be quite honest, many viewers will most likely find it slow moving and dull. But Majewski paints images so breathtaking and haunting that it's hard not to be moved by it on some level. It's a compelling museum piece, an engaging piece of art history brought to vivid life by a man with a keen understanding of its roots and origins. For all those interested in art, or just in unconventional cinema, The Mill & The Cross will be a revelation.

THE MILL & THE CROSS | Directed by Lech Majewski, Charlotte Rampling, Michael York | Not rated | Opens today, 9/14, at the Film Forum in NYC and runs through Tuesday September 27th.
Email Post