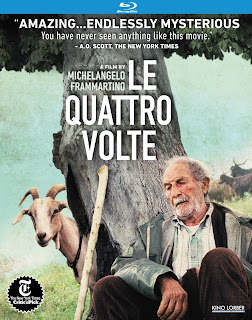 NOTE: The following is a repost of my original review from April 11, 2011, with a new post-script regarding the Blu-ray release.

There is something to be said for a film, in this age of bigger, faster, louder, that is able to convey itself completely without dialogue. Michelangelo Frammartino's Le Quattro Volte is a film of feelings, of textures, a narrative journey that is more spiritual and abstract than grounded in the literal, more physical world of words.

Not unlike Apichatpong Weerasethakul's recent Uncle Boonmee Who Can Recall His Past Lives, Le Quattro Volte is a meditation on reincarnation, an exploration of a soul's journey through different phases of life.

The film opens with an elderly shepherd nearing the end of his life in the medieval Italian village of Calabria. His only company are the faithful goats who serve as his constant companions. A nagging cough has driven him to seek medication, in the form of dust from a local church, which he trades for goat milk and mixes with his water every day.

His eventual death coincides with the birth of a baby goat (a remarkable and life-affirming scene in and of itself), and the film follows it as it embarks on its life, eager and curious about the world around it. But one day it becomes separated from the herd, and is left to wander the forest on its own, eventually coming to rest under a great fir tree. The next Spring, the tree is chosen by the villagers for their annual "Pita" celebration, and is chopped down and brought into the town. When the party is over and the villagers have returned to their homes, the tree is sold to coalmen, who break it down to be turned into charcoal, releasing its smoke into the air and continuing the life cycle from where it began.

The title, Le Quattro Volte, translates into "The Four Times," a reference to the four lives the soul of the old man lives in the course of the film. Frammartino isn't interested in creating a conventional narrative, but don't be fooled by its often highly metaphorical execution. There is a story here, and it's a deeply compelling one. It's the story of life, lived out in 88 minutes. Frammartino tells his story through images, completely sans dialogue, and does so with such a masterful hand that we almost don't notice that for the film's entire running time, no one speaks. We hear human voices, but they are often unintelligible, either off in the distance or as back ground noise. They are, in the grand scheme of things, irrelevant and inconsequential in the grander scheme. The film's real focus is a spiritual one. Words and human concerns fade in time, but this soul continues unabated, transitioning effortlessly in a never ending cycle.


Like the great silent directors, Frammartino conveys the story through images of often profound beauty. An early shot of dust floating in a ray of light in the church the shepherd visits for medicine foreshadows a later stage in his soul's earthly odyssey, and suggests the fate of others like him from time long past. There is not a wasted shot to be seen here, each is pregnant with possibility and teeming with an inner life; mostly consisting of long, seemingly effortless takes. Despite its wordlessness, or perhaps because of it, Le Quattro Volte enraptures its audience, holding us in its grasp with bated breath, enthralled in each delectable moment and spellbound by its haunting stillness. It is as if Frammartino has stumbled upon a deeply profound truth, something filmmakers so rarely hit upon. His film seems to embody life itself, a feat made even more impressive by its brief running time.

This is powerful and confident filmmaking, a kind of cinematic poem that stares deep into the human soul and emerges with a quietly moving and deeply meaningful experience. I so rarely use the word 'masterpiece' in reviews for fear of unearned hyperbole, but that is exactly what Le Quattro Volte is - a masterpiece. It's a brilliant work of art, a staggeringly masterful and evocative film whose power transcends mere words and enters the realm of the spiritual. No matter one's religious beliefs, there is something of the divine to be found Le Quattro Volte, a whispered hint of the soul's immortality that lingers like a wisp of smoke on a mountain. This is what great cinema is all about.

Blu-ray addendum: Five months on, Le Quattro Volte is still my favorite film of the year, even after the release of Terrence Malick's magisterial The Tree of Life. It's interesting now comparing the two films and their vastly different approaches to similar subjects. While I still think Malick's grandiose vision is masterful and awe-inspiring, I actually prefer Frammartino's simplicity. Where Malick has poetic dialogue and soaring choirs, Frammartino has silence, and in the hands of the right director, silence can be even more powerful.

I'll admit to being slightly disappointed in Kino's Blu-ray release of the film. There are no special features to speak of (save for a lone trailer and photo gallery), and the image quality is surprisingly grainy. But, much like Uncle Boonmee, the grain of the film actually works in its favor. There is a more real, earthy quality to it, bucking the usual trend of pristine images on Blu-ray.

The lack of special features isn't surprising, and in the end it's almost preferable. Le Quattro Volte is a beautiful mystery, and it remains so on Blu-ray, without in depth documentaries and commentaries explaining every little detail. It is simply presented as it is - a haunting, quietly soulful film that seems to carry with it a spark of the divine. And really, what more can you ask for?