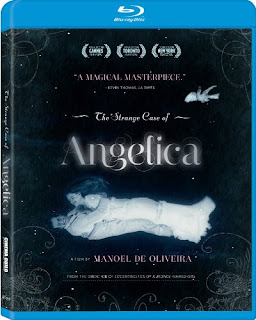 It's interesting looking at the learning curve between Cinema Guild's inaugural blu ray release, Marwencol (an admittedly unusual, but highly successful choice), from this past April, to their sophomore release, Manoel de Oliveira's The Strange Case of Angelica, one of the finest films of 2010.

Marwencol was an excellent first foray into the blu-ray format, but Angelica takes the game to a whole new level. The attention to detail on this disc, and the wealth and quality of the extras nearly rival that of the Criterion Collection. Of greatest note to de Oliveira fans (and cinephiles in general), is the inclusion of the 102 year old director's first film, the 1931 silent short, Douro, Faina Fluvial (Labor on the Douro River), a chronicle of life on Portugal's Douro river. It's fascinating to watch the origins of the artist that we know today, especially coming at the tail end of the silent era (Portugal's fledgling film industry was late in catching up with sound).

Douro, Faina Fluvial is clearly the work of a much younger man than the more seasoned de Oliveira we know today. It's an energetic work, teeming with life and cut in an almost Soviet Montage style the recalls the work of Dziga Vertov and Jean Vigo (de Oliveira almost certainly saw Vigo's A propos de Nice before making this film). The new 2K restoration of Douro, Faina Fluvial is staggeringly pristine, especially for a film of its age. It's surprisingly well preserved, and the 1080p presentation is astounding, completely lacking the dirt and scratches often associated with other films of the era. It's a wholly different work from The Strange Case of Angelica, which is quiet and measured, a film that evokes the still photography that informs its thematic substance. It seems that de Oliveira in his later years has settled down (not to be mistaken with mellowed out) into someone more comfortable and confident in his craft (although his first film is an undeniably thrilling work), who isn't afraid to let his camera simply observe. The aesthetic experimentalism of his youth (clearly embracing his influences) has given way to a calm sort of assurance, replaced with a strict adherence to cinematic formalism. As I said in my original review:


Isaac's landlord chides him for photographing field workers across the street, saying that no one does it by hand anymore, that it is all done by machines now. "Old fashioned work interests me." He replies. One can almost hear the words being uttered by de Oliveira himself, who is obviously far more fascinated by old fashioned societal constructs and cinematic formalism than the modern world. Except his work never feels outdated - it feels timeless, almost as if his characters exist within their own temporal reality. Much like in Eccentricities of a Blonde-Haired Girl, the characters seem almost displaced in time, but feel less like inhabitants of a bygone era than citizens of their own private world, trapped in a pristine snow globe.

The disc also includes a 1992 documentary, Oliveira, L'Architecte by Paulo Rocha, as well as an illuminating 35 minute conversation with de Oliveira himself. It's fascinating watching the centenarian master singing the praises of James Cameron's Avatar while chiding the Academy of Motion Picture Arts and Sciences for failing to bestow a posthumous award upon the father of cinematic fantasy, Georges Méliès.

As for the film itself - it's simply breathtaking. De Oliveira's imagery has never looked better - it's a crystal clear evocation of the director's photographic intent. From my original review:


Like the photographs of the dead Angelica, every shot of The Strange Case of Angelica is framed like a photograph of its own. De Oliveira deliberately frames each shot with a photographer's eye, giving the audience a small window into the peculiar lives of his protagonists as if thumbing through an especially exquisite family album. If Eccentricities is the work of a master painter, then Angelica is the work of a master photographer for whom every picture is a glimpse into its subject's soul.

De Oliveira's sly and haunting exploration of perception through art feels even more potent on blu-ray, even if the film's content hasn't changed. There's just something about the perfect images that enhance the director's vision and turn them into something almost transcendent. The Strange Case of Angelica isn't just one of the finest films of 2010, it's one of the must-own blu-rays of 2011. Kudos, Cinema Guild. This one is a home run.