Review | "The Strange Case of Angelica" 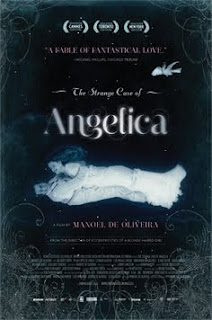 "Time, stand still. And you, former beings who roam fantastical, celestial ways, Angels open the gates of Heaven, for in my night is day, and God is in me."

So reads a poem oft quoted in Manoel de Oliveira's The Strange Case of Angelica, the latest film from the staggeringly productive 101 year old director from Portugal. Its strange and exquisite beauty mirrors that of the film for which it provides a backbone, and in its own way, seems like a sort of poetic synopsis, expressing the film's themes even as its characters utter it.
His second film to be released this year after Eccentricities of a Blonde-Haired Girl, The Strange Case of Angelica serves as a kind of spiritual companion piece to that film, sharing not only similar themes of forbidden love but also its lovelorn protagonist, in the form of de Oliveira's grandson, Ricardo Trêpa. Here he plays Isaac, a photographer who is summoned to the estate of a wealthy family to take the final photographs of their lovely young daughter, Angelica (Pilar López de Ayala), who tragically passed away in the night. 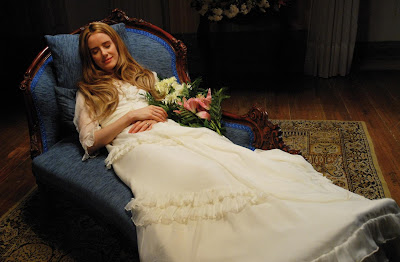 Pilar López de Ayala in “The Strange Case Of Angelica.” Courtesy of The Cinema Guild.
Upon seeing Angelica for the first time however, he is strangely drawn to her - even more so, when her serene corpse seems to smile at him. At first taken aback, Isaac instead finds himself increasingly obsessed with Angelica, poring over her photographs, hoping for another glimpse of her beautiful, smiling face. Soon, Angelica threatens to take over Isaac's entire life. Even his neighbors begin to notice his peculiar behavior. Isaac's landlord chides him for photographing field workers across the street, saying that no one does it by hand anymore, that it is all done by machines now. "Old fashioned work interests me." He replies. One can almost hear the words being uttered by de Oliveira himself, who is obviously far more fascinated by old fashioned societal constructs and cinematic formalism than the modern world. Except his work never feels outdated - it feels timeless, almost as if his characters exist within their own temporal reality. Much like in Eccentricities of a Blonde-Haired Girl, the characters seem almost displaced in time, but feel less like inhabitants of a bygone era than citizens of their own private world, trapped in a pristine snow globe.

Like the photographs of the dead Angelica, every shot of The Strange Case of Angelica is framed like a photograph of its own. De Oliveira deliberately frames each shot with a photographer's eye, giving the audience a small window into the peculiar lives of his protagonists as if thumbing through an especially exquisite family album. If Eccentricities is the work of a master painter, then Angelica is the work of a master photographer for whom every picture is a glimpse into its subject's soul. 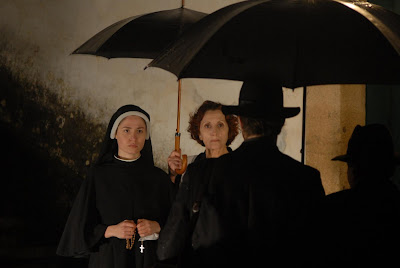 Ricardo Trêpa in “The Strange Case Of Angelica.” Courtesy of The Cinema Guild.
De Oliveira playfully toys with the ideas of perspective through art, but he is also a sly wordsmith as well. When the characters discuss the nature of matter and anti-matter around the dinner table, it is clear that science isn't what they are talking about, they are talking about love - attraction through reaction. Isaac views the world through a camera lens, and it is through that camera lens that he finds love, even if the woman he falls in love with is dead. The camera gives her life, and through art she finds eternal life. It is understood that this cinematic exploration of art and its effect on human perspective is a kind of irony in itself. De Oliveira is a supreme cinema artist. The way his camera lingers on the night sky, or a wisp of smoke is breathtaking. There is no wasted shot or meaningless gesture. At 101 years old, he continues to grow and to impress, and here his narrative is a multi-layered work of great meaning and formalist skill. His formal mastery is on staggering display here, communicating with the audience on myriad levels, in essence using art to make a comment on art.

With skills as sharp as ever, De Oliveira crafts a haunting narrative, a film of great resonance and beauty that penetrates greatly beneath its deceptively simple veneer. Even at 101, he is still outpacing directors less than a third of his age. A lifetime of observing, learning, and absorbing cinematic craft has led to a kind of assured perfection - studied, yes, but brilliant nonetheless. It is a master class in cinematic formalism, from a man with a lifetime of knowledge and experience. This is how you do it, kids.