Romania Submits "The Rest is Silence"

Regular readers of From the Front Row know what a sucker I am for Romanian film (Cristian Mungiu's 4 Months, 3 Weeks, and 2 Days is still my #1 film of the year), so when I heard the news that Romania had chosen the ambitious, film within a film epic, The Rest is Silence, to represent it at this year's Academy Awards, I was immediately excited. Not only because it's a Romanian film, but an epic Romanian film. 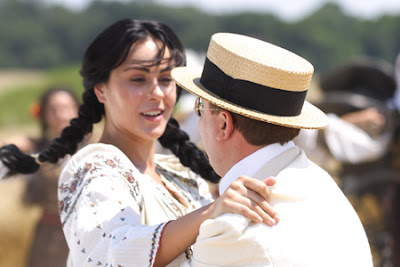 Now this seems to go against all the reasons I love the Romanian New Wave - the minimalism, the sparse music and stark editing, but I'm hugely curious to see what director Nae Carnfil will do with the material, which chronicles the making of The War of Independence, Romania's first epic film, in 1912.

The Rest is Silence is the most expensive film in Romanian history.

Anonymous said…
This is definitely exciting news Matthew. If I were to consider 4 MONTHS as a 2008 film, I might well agree with you that it is #1 But I counted it for 2007, and it finished near the top. I admire your great passion for the film and share it. This new release is something to keep your eyes open for.
6:40 PM

Anil Usumezbas said…
What other Romanian films would you recommend, among the ones you have seen? I'll take you as a reference.
4:04 AM

Matthew Lucas said…
I would definitely recommend THE DEATH OF MR. LAZARESCU and 12:08 EAST OF BUCHAREST. CALIFORNIA DREAMIN' (ENDLESS) is also very good, but it's a different animal than the others.
2:03 PM

Anil Usumezbas said…
Lazarescu and east of bucharest were indeed quite good. Watching the latter in a packed theater was really a memorable experience. Didn't see california dreamin' but I heard it was not bad also.
3:03 AM