Review: "I Served the King of England" 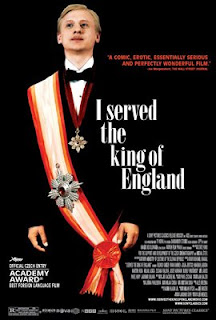 Czech filmmaking is an area that I am admittedly not very knowledgeable in. I am aware of director Istvan Szabo, but only because of his work on the sublime Being Julia. It's interesting then that arguably the most well known contemporary Czech director actually appears in Jiri Menzel's equally sublime I Served the King of England.

Taking place mostly as a flashback of an old man who has just been released from prison after 14 years behind bars, I Served the King of England introduces us to Jan Dite (Ivan Barnev in his younger years, Oldrich Kaiser in his older), a lowly hot dog vendor who dreams of one day becoming a millionaire and owning his own hotel. As he works his way up through the ranks of society, first as a busboy and later as a waiter, constantly at the arm of the wealthy, Jan amuses himself by dropping coins on the floor and watching the inevitable human reaction (even among the rich) of scrambling to pick up as many as they can.

He also finds plenty of time for romance, seemingly becoming a magnet for women wherever he goes. But it isn't until the Germans invade Czechoslovakia on the threshold of World War II, that he meets his true love, Liza (Julia Jentsch), a beautiful Nazi school teacher for whom he falls head over heels. 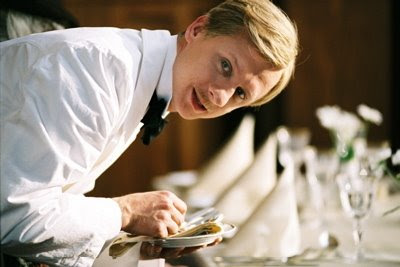 At that point, I Served the King of England makes the transition from droll, carefree, Keaton-esque pre-war comedy, to a wistful, tragic tale of a country who has lost its identity in the face of Nazi oppression. Even Jan, in his blind love for Liza, joins right in with the Nazi ranks, not recognizing them for the evil that they are.

It's jarring seeing Julia Jentsch, Sophie Scholl herself from Sophie Scholl: The Final Days, as the beguiling Nazi, Liza. But it's easy to see why Jan fell for her. Menzel extends her the courtesy that the Third Reich refused to afford so many - he portrays her as human. We never escape the feeling that Liza is, at heart, a good person who has been corrupted by overwhelming propaganda and promises of a German utopia. And in his love for her, Jan goes right along, despite constantly being treated as a second class citizen by the German occupiers. 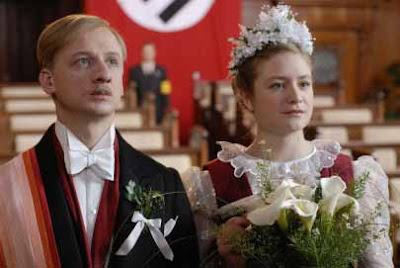 It is for precisely that reason why I Served the King of England is so much more than it immediately seems to be. It begins as a comedy, with Jan almost Charlie Chaplin-like in his singular charm. As our guide through the pre-war lavishness and later the post-war devastation, Jan views everything through a child-like lens that makes everything seem slightly better than it is. Menzel balances that naivete with reality quite well, as the innocence of the time before WWII comes crashing down around them.

Through it all, however, Jan keeps his head up and spirits high, giving the film a light, bouncy quality even at its most tragic. Menzel's quirky tone and skillful balance of feelings makes for a beguiling journey through the memories of an old man who is just starting to find himself again in the memories of a lifetime well spent. I Served the King of England may not be earth shattering filmmaking, but it is a captivating, heartwarming, and ultimately life affirming celebration of what makes us human.

J.D. said…
Yay! The more I hear about this, the more I want to see, and I wanted to see it a lot in the first place!

I usually say Julia's Sophie is my favorite performance of all-time, so she's definitely an actress that I'll see in anything. I also loved her in The Edukators.
1:29 PM

Matthew Lucas said…
I wouldn't call Jentsch's performance in SOPHIE SCHOLL my favorite of all time, not by a longshot, but she is quite good.

I thought the film should have won Best Foreign Language Film over the bland TSOTSI that year (sorry Nick)...it is woefully overlooked.
4:01 PM

Anonymous said…
I completely agree with this assessment, as well as the rating. I gave it 4/5, which is basically the same. I think you really nailed it here, beautifully written and most observant. Menzel is surely the greatest living Czech filmaker.
6:40 PM

Fletch said…
I walked by the poster (granted, from about 15 feet away) for this yesterday and would have bet money that that was Macaulay Culkin on it.
7:48 PM

Matthew Lucas said…
Sam - thank you. As I said in the review The Czech Republic and Slovakia are part of a region whose film industry I know very little about. But if this is any indication I want to know more.

Fletch - haha yeah he does look a bit like an older Macaulay Culkin. He also reminds me a bit of Charlie Chaplin and Ichabod Crane from Disney's old cartoon version of The Legend of Sleepy Hollow.

truffle said…
I feel somehow wounded that this film, which I found to be superb, has received so little press attention. It is remarkable for it's sensitivity, inventiveness, and poetry. It's like a personal insult to see it so ignored.
4:24 PM