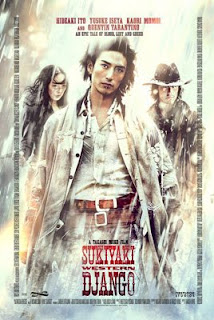 It turns out that doesn't really matter, because Sukiyaki Western Django isn't a film about contemporary style, it is a throwback to the Spaghetti Westerns of old, as seen through a decidedly Eastern perspective.

The film centers around a small village in the Nevada countryside that has been taken over by two warring gangs, the Reds and the Whites, both searching for a legendary lost treasure said to be buried somewhere nearby. The gangs and their ruthless leaders hold the village in a grip of fear with their constant fighting and merciless killing, until one day a mysterious gunfighter wanders into town to rescue the town from the gangs' reign of terror, and woo a local widow whose son may be the key to their future. 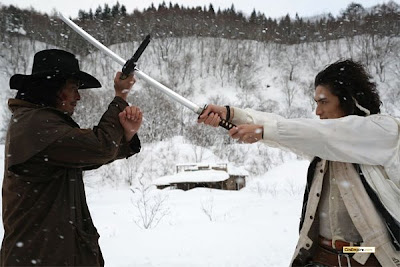 The film is very much an amalgram of films such as The Good, the Bad, and the Ugly and Once Upon a Time in the West, drawing upon the conventions and cliches of its genre to create a loving homage and sly parody. It never takes itself too seriously, although it does play it straight most of the time, keeping the humor subtle even when the action is not.

Despite this being a Western, there are undeniable Eastern influences here, bringing in bits and pieces of the Japanese equivalent, the samurai film (there are shades of Kurosawa's Seven Samurai to be found in several scenes), making it almost like a mash-up of both Kill Bill films. Which is appropriate given the presence of Quentin Tarantino hamming it up as an old time gunfighter who figures prominently in the film. His character (and by turn his very presence) is high camp, adding to the ridiculous nature of the plot, but I ultimately felt like he distracted from the rest of the film. He comes of more as a stunt than an inspired cameo. 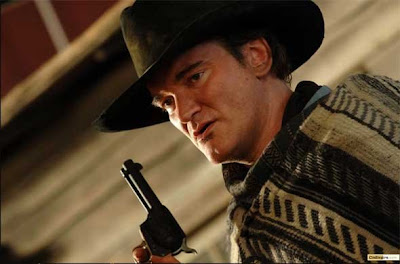 In fact, that is where Sukiyaki Western Django falters the most. It's modern flourishes feel strangely out of place, as if they belong in another movie. In one particular scene the image freezes, and with machine-like sound effects the camera begins to scan the frozen image like some kind of high tech security camera, before landing on the target it was looking for and starting the image back up again. These moments are so few and far between that they seem more like stylistic experiments with no real purpose, and ultimately they just don't work.

The rest of the cast is made up entirely of Japanese actors, giving the idea of the Western a new twist that is both welcome and jarring. The dialogue is often unintelligible, but the cast devote themselves to the goofiness of their surroundings (especially Teruyuki Kagawa as a bumbing lawman with multiple personalities).

They, like the audience, understand the gleeful trashiness of the film they are in, and never try to make it anything more. Sukiyaki Western Django is a stylish and fun genre throwback that honors the films of the past while crafting a rip-roaring new experience with a gritty and clever verve.

Anil Usumezbas said…
"These moments are so few and far between that they seem more like stylistic experiments with no real purpose."

I don't think the film itself has any purpose so those things never really stood out for me. Aside from being a homage/parody, Sukiyaki Western Django is also an absurd comedy for which 'things that make sense' do not constitute a serious concern.

I agree with the rest of your analysis. The consistently funny thing in the film for me has been Japanese actors uttering stereotypical western lines with their heavy accents, all the while being aware of the absurdity of their situation. And Tarantino was a complete surprise since I saw this one way before the beginning of its U.S. publicity.

In fact I dugg out my old review in case you are interested:

It's together with two other films that I saw on the same day.
5:09 PM

Matthew Lucas said…
I didn't think they had a purpose because they seemed so out of place they didn't mesh with the tone of the western parody, but the only one that really bothered me was the one I mentioned in the review.

I agree about the stereotypical lines, that always brought a smile to my face.
5:15 PM

Anonymous said…
I gave it a bit less, but that's all numerical semantics. I basically completely agree with your most well-composed review. I like AUDITION, but it's nothing like this.
5:43 PM