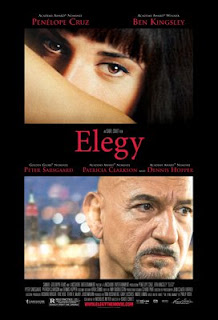 I may have been one of the few people to praise Robert Benton's film adaptation of Philip Roth's The Human Stain. It's not a great film, but I stand by its competence. I think for many people, however, Roth's somber tones and subject matter tend to translate to the screen as turgid and downbeat.

So for Isabel Coixet's Elegy, an adaptation of Roth's novel, The Dying Animal, the result could have gone either way.

To my pleasure, I found Elegy to be a finely crafted, intelligently written work, featuring some exceptional performances by Ben Kingsley and Penelope Cruz.

Kingsley stars as David Kepseh, a cultural critic and college professor, long since divorced from his wife and in a long term, no strings attached sexual relationship with an almost always absent businesswoman (Patricia Clarkson), who falls in love with a sophisticated and beguiling Cuban graduate student, Consuela (Cruz).

Unused to the feelings of love after a failed, loveless marriage, David is struck by pangs of jealousy and possessiveness that he has never felt before, throwing his life into unexpected disarray. His only refuge is in the arms of his other lover, a constant beacon of stability and non-commitment, and his best friend, George O'Hearn (Dennis Hopper), a noted poet and fellow professor. 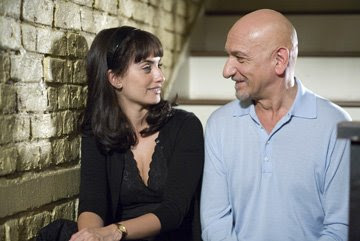 For all of its potential for soap opera leanings, Coixet handles the material well, taking the familiar tale of a professor and his student, older man with younger girl, and keeping it inwardly focused rather than wallowing in its sordid nature. It's a character study of the effects of loneliniess, jealousy, and the fear of commitment, even in a man for whom society dictates should have settled down long ago.

It juxtaposes David with his bitter son, Kenneth (Peter Sarsgaard), who still has not forgiven his father for walking out on their family, but is going through similar marital problems and does not want to see himself make the same mistakes as his father, who is somehow making them all over again. How can a father and son be so different yet so alike? The film never explores their relationship as deeply as I would have liked, and I felt that the dynamic between them was one of the film's weakest aspects. It is an afterthought, and rightfully so, to the main thread of David's relationship with Consuel. But it's so much of an afterthought that I never really accepted it. 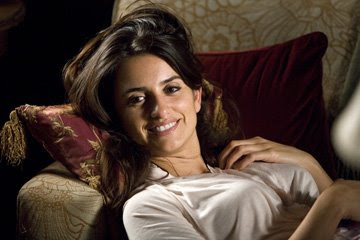 I was also not a fan of Kingsley's narration. I'm not usually a fan of narration anyway, I generally find it to be an unnecessary narrative crutch that betrays an inherent weakness in the storytelling. This isn't always the case (The Assassination of Jesse James by the Coward Robert Ford is an excellent recent example), but here it just doesn't work, and I often found it jarring and a needless addition to the action. Sometimes more can be said by saying nothing at all.

Overall, however, I found Elegy a pleasure to watch. It has an extreme air of quality, in part because of Coixet's fine craftsmanship and the performances of a strong cast. It is obviously a film of class and high caliber - an engaging grown up drama that doesn't always hit all the right notes, but hits most of them most of the time.

Anonymous said…
Good thoughts. I'm more or less in the same boat. I thought the film was too long and was dragged down by too many subplots. It had flashes of energy and surprisingly sweet tenderness, though, almost in spite of itself.
3:44 AM

Matthew Lucas said…
Thanks for stopping by Alexander!

I wasn't a big fan of the subplot with the son...it always seemed of a bit of an afterthought to me. It really worked best when it focused on Kingsley and Cruz, who were both fantastic.
1:45 AM

Anonymous said…
I didn't like this movie much Matty :( It was great in some parts, but then it became tedius for other parts, idk, didn't like the son subplot either. Loved Cruz.
2:11 AM