Despite early rumors that Steven Soderbergh's two-part Che Guevara epic, Che, would be distributed by Magnolia Pictures, IFC has picked up the distribution rights, with an aim toward a one week qualifying run in December, and a wider release in January. The film will also be released on IFC On Demand on the same day. 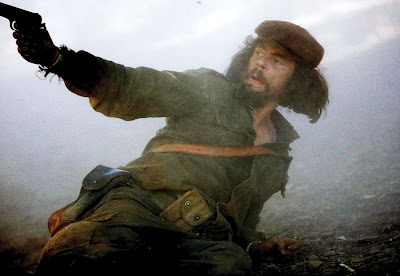 It seems as though the film will remain as one, 4 hour plus package, instead of being split into two films as was originally planned.

IFC president Jonathan Sehring had this to say about the film:

"'Che' is nothing less than the film event of the year. By giving us the rise and fall of one of the great icons of history, Steven Soderbergh and Benicio Del Toro...have humanized him and given audiences around the world something that will be discussed for years to come."

I've been excited about this one all along, but now that the prospect of a release has gotten closer, I almost can't wait. I'll be there on opening day.

Anil Usumezbas said…
All it takes for this film to be divided into 2 parts is it falling in the hands of Harvey 'Scissorhard" Weinstein. Oh god, I hate the guy...

Good to hear these people have some artistic insight and respect.
5:49 PM

Matthew Lucas said…
Indeed. These are the best people for the job I have no doubt.

And this ensures I'll get to see it opening weekend!
3:55 AM