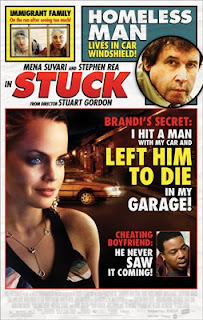 It may have been released back in May, with a DVD street date of October 14, but I'm just now getting a screener copy of Stuart Gordon's Stuck.

Better late than never I guess.

Living in Cinema's Craig Kennedy put this one on my radar back in June, but in typical fashion the movie never opened in this area. Which is interesting because I think this latest offering from the director of Re-Animator could have been a moderate mainstream success.

Gordon made the transition from B-grade horror to more character driven work in recent years, and Stuck is an interesting amalgam of both. It's not always entirely successful, but as a ripped from the tabloids exploitation piece with political overtones, it works rather well.

Mena Suvari stars as Brandi Boski, a nurses' assistant in a nursing home who is about to receive a major promotion. But her world soon comes crashing down when after a night of hard partying, she hits a homeless man named Thomas Bardo (Stephen Rea) with her car and flees the scene in a panic, leaving him stuck through her windshield clinging to life. 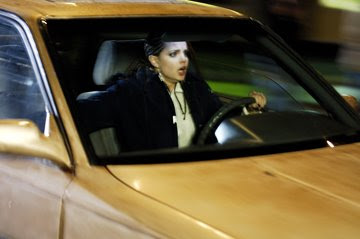 Unsure of what to do and afraid of the consequences, Brandi leaves Thomas in her garage to die, still stuck in the windshield, hoping that she can cover up her crime and still receive her coveted promotion. Thomas, desperate to escape, struggles to stay alive, ending in a harrowing battle of wits in an explosive fight for survival.

It's a tawdry, torrid premise, and Gordon zeros right in on its sleazy tabloid nature, giving the film the feel of a old fashioned exploitation flick. And for the most part it works. Stuck is filled with dark humor and enough gore and bloodshed to satisfy and bloodthirsty horror fan. The film's biggest downfall, however, are the performances, which with the exception of Rea (who is actually quite good), seem forced or phoned in, and quite a few moments seem to be the victim of poor post production dubbing. Rea is most definitely the highlight and the film's heart and soul, providing an emotional anchor and a sane character to root for to keep the film moving. He's able to do quite a bit with the character, even though he spends most of his screen time stuck through a windshield. 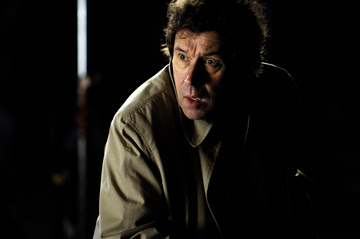 Despite the film's obvious exploitation roots, there is a lot more going on here than initially meets the eye. Rea's Thomas is a victim of the system, a regular middle class man who falls victim to a slow economy and an uncaring bureaucracy, left behind by society and newly homeless, who falls victim to another unassuming woman who puts her scruples aside in order to advance her career. Brandi is willing to let another man suffer and die so she can have what she wants. She's stepping on the downtrodden to lift herself up.

It is here where Stuck becomes something more than just another sleazy high concept thriller, and turns into a not-so-subtle swipe at capitalism. This added dimension makes for something better than your average horror film, but I couldn't help but feel a little battered myself by the end of the film. Nothing about it is subtle, and while that may very well have been the point, I can't help but feel that there was more emotional territory to be explored here rather than just blunt force political commentary

You have to respect Gordon for going the extra mile though. And even though he isn't always successful in his aims, Stuck is still a lean, nasty piece of work that deserves a wider audience than it is ever likely to receive.