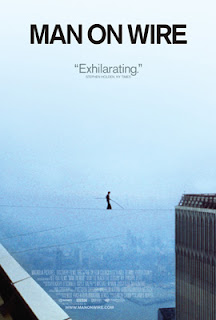 This review has been a long time coming.

For weeks now, James Marsh's Man on Wire has been fawned over by critics and bloggers everywhere, especially at From the Front Row favorites Getafilm and Living in Cinema. And all the while I could only sit back and watch, a victim of a small market where movies like this take their own sweet time getting there. In other words, if I don't get a press screening or screener copy, I'm up a creek.

So, never being the patient one, I traveled nearly 2 1/2 hours to the newly opened Park Terrace theater in Charlotte, which specializes in independent, foreign, and art house fare, where Man on Wire recently opened.

And I wasn't disappointed. This, ladies and gentlemen, is what documentaries are all about.

Man on Wire takes us back to 1974, introducing us to Philippe Petit, a tightrope walker who dreamed of doing the impossible. He started off small, with tightropes in the backyard and such, eventually working his way up to walking between the belltowers of Notre Dame.

But it wasn't enough - it was never enough. Petit wanted more, he wanted to stage the ultimate rope walking coup and fulfill the dream that started it all when he saw the images of two towers in the works in New York City - he wanted to walk between the towers of the World Trade Center. 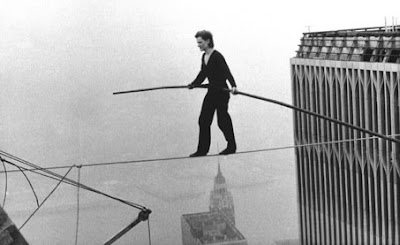 So he gathered a group of friends to be his accomplices, and travelled to America to make his dream come true by staging what would later come to be called the artisitic crime of the century.

Through interviews, photographs, and reinactments, Man on Wire takes us on a journey back in time with Petit and his crew as they relive their historic accomplishment, that has often been forgotten about in the subsequent years. But Marsh, mostly through the unbridaled enthusiasm of Petit himself, makes it all seem thrillingly immediate. We are there with Petit as he makes that first ominous step out over the seemingly infinite space between the towers. And even though there was almost no film taken of the event (there is a little bit of footage taken from the ground and circling helicopters), just the photographs themselves offer some of the most exhilarating cinematic moments I have seen in quite some time.

Man on Wire conjures a sense of awe that is so rarely ever captured in films with ten times its budget and with all the special effects wizardy Hollywood has to offer. Petit, and his then girlfriend Annie, have such a vivid memory of the event (and in Annie's case, such a profound reverance) that they paint unforgettable images with just their words. It is a magical, enthralling evocation of deep wonder and freedom - of a man who dared to dream the impossible and reached out and touched the sky.

To walk on air, to be suspended between two of the highest structures on the planet and feel no fear - Petit is a remarkable human being with an indominatable spirit, and Man on Wire captures that youthful exuberance he still possesses even today, and turns it into a thing of great beauty. 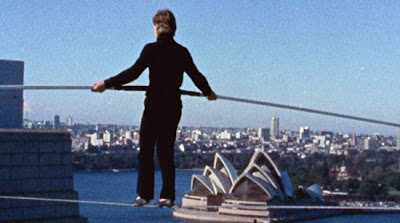 Of course it is also underscored by a haunting poignancy brought on by the events of September 11, 2001. To its credit, the movie never mentions it, but it is impossible to watch see the Twin Towers without seeing flashes of their fiery demise some 27 years later. You see the photographs of Petit's astonishing walk, you see the wall on the roof that he signed with a drawing of his tightrope, and you realize with a pang of sudden sadness that they are no longer there. The mountain that Petit so blithely conquered has fallen forever.

Thankfully, the movie ignores it completely, the only hint being that the towers are spoken of in the past tense. Marsh never pushes the subject, instead focusing on the triumph of Petit's walk and letting that bittersweet victory speak for itself. We don't need to be reminded of what we already know - the nagging sadness is already inherently there. But for that magical walk across the void, suddenly all of that is forgotten, and we are back to 1974 when one man dared to make his dream come true.

Now it can be seen for a whole new generation - one in which the object of Petit's obsessive fascination no longer exists, and as such we need something to dream about more than ever. It may sound corny, but Man on Wire reminds us that dreams can come true and men can fly, through the heights of the imagination and the triumph of the human spirit - this a film for all those who ever dared to dream.

Anonymous said…
This has been on my must-see list for a while now, I cannot wait to scratch it off.
8:43 AM

Matthew Lucas said…
Nicky I feel your pain man. Hopefully you'll be able to scratch it off soon.
1:45 AM

Anil Usumezbas said…
Luckily, I have an arthouse theater right net to my house, I might go and see it sometime soon.
5:54 PM