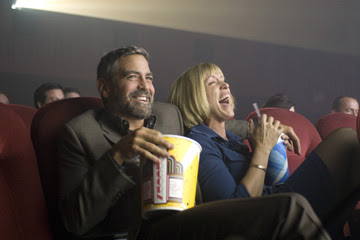 I think the picture pretty much sums it up.

Make no mistake, however. Burn After Reading is not a knee-slapping laugh riot. It is something much more subtle than that (but it is pretty damn funny). The Coen Brothers have crafted a thinking man's espionage comedy without any spies - it's just a bunch of two-bit losers who are in way over their heads.

They're not bumbling idiots of course, they just can't seem to get it together, and they all think they're far smarter than the really are.

It all plays into a familiar Coen theme of regular joes whose get rich quick schemes blow up in their faces - Fargo, The Man Who Wasn't There, The Ladykillers, even No Country for Old Men, but it's as each one of those films are worlds apart from each other, so too is Burn After Reading. The films may share common themes, but as usual the Coens find a new and original way of expressing it.

There is a definite light on its feet quality to Burn after Reading that I really enjoyed. It's a great, kick back and enjoy the ride kind of film that doesn't treat its audience like idiots - in other words it requires a little bit of attention. It's ridiculous of course, and that's what makes it fun. As J.K. Simmons says at one point: "Call me when it makes sense."

It's a knowing wink to the audience, and another slyly subversive success for the Coens.

Anonymous said…
Very fine capsule here, and I will keep this in mind as I trek down to my local multiplex in about two hours for a 7:00 P.M. showing of the film.
4:11 PM

Nicky you need to hurry up and come to America, you're starting to sound like a broken record. ;-)
5:28 PM

Anonymous said…
Oh what do you mean starting, I've been a broken record for MONTHS now, I thought it was part of my charm [or something]....lol.
2:45 PM