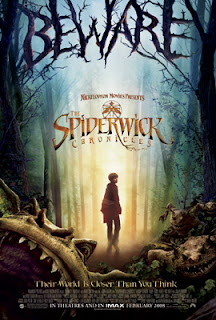 Studios' rush to cash in on the success of the Harry Potter films, as well as the fact that kids were actually, you know, reading, set off a spat of films determined to win children back from the world of books and into theaters where they belonged.

Some, like The Chronicles of Narnia: The Lion, The Witch, and the Wardrobe, have succeeded admirably. Others, like The Golden Compass, have left much to be desired.

So that makes Mark Waters' The Spiderwick Chronicles, which opens everywhere today, a welcome treat indeed.

Starring Freddie Highmore as twin brothers Jared (the angsty rebel) and Simon (the timid nerd), who along with their sister Mallory (Sarah Bolger), discover an old book after moving into their family's creepy abandoned estate that opens their eyes to a fantastical alternate world of fairies, goblins, trolls, and other magical creatures co-existing with our own. 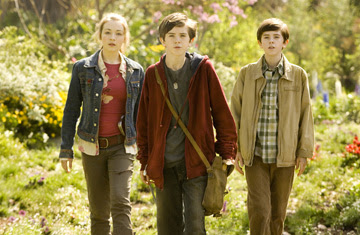 Not all the creatures are peaceful and good natured, however. Some will do anything to obtain the secrets contained in the book, and the evil ogre Molgarath (Nick Nolte) is even willing to kill for it.

There's nothing particularly groundbreaking about the plot, which is pretty standard children's fantasy fare, and some of the dialogue swings toward stilted, especially during some awkward exposition at the beginning. But Spiderwick comes into its own very quickly. Thanks to fine performances by the young cast (Freddie Highmore has never been better), some amusing cameos (Seth Rogen and Martin Short have great fun in their voice-over roles), and always welcome veterans (David Strathairn and especially Joan Plowright are a delight), the film draws us into the world and takes us on a fantastic adventure, and in the process manages to conjure a real sense of child-like wonder. 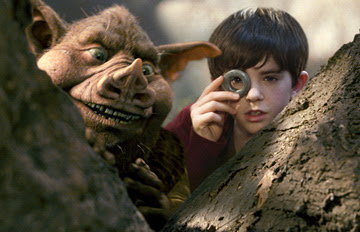 Which I must say was not what I was expecting. I was expecting it to be something far more childish than it actually was. Of course this is kiddie fare, but its great fun, and ultimately even moving.

The Spiderwick Chronicles is pure escapism of a rare quality - it never panders to children or tries to shove an ham-fisted message down their throats. It's a far more successful adaptation than the first two Harry Potter films, and even though I have never read the book series on which this is based, I had a great time.

As did most of the children who attended the press screening in Charlotte earlier this week. Many films claim to be "fun for the whole family." This one actually is.

eowyn324 said…
nice writing. I was just perusing and fell across your page. Its great to see another film enthusiast. I'm a reviewer myself for local radio stations. Its a fun job. :)
4:50 AM