Maleficent, Disney's 2014 reimagining of their own animated Sleeping Beauty; recasting the villain, Maleficent, as the hero of the story - a misunderstood fairy who had once been in love with Aurora's father, King Stefan, but fell victim to his relentless ambition. The film grossed over $700,000,000 worldwide, so a sequel seemed all but inevitable, even if there was no more story left to tell from the original Sleeping Beauty. 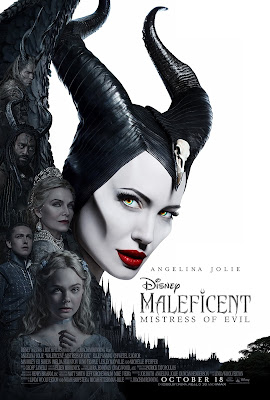 That leaves Maleficent: Mistress of Evil to forge its own creative path, and the results are somewhat mixed. The film picks up a few years after the original - Aurora (Elle Fanning) is now Queen of the Moors, having been adopted by Maleficent (Angelina Jolie) as her own daughter. When Prince Phillip (Harris Dickinson, replacing Brenton Thwaites without anyone really noticing) proposes to Aurora despite Maleficent's objections, it seems as if a new era of peace and unity is at hand for the magic folk of the Moors and the adjacent kingdom of Ulstead. But Phillip's mother, Queen Ingrith (Michelle Pfeiffer) has other plans, cursing her husband, King John (Robert Lindsay), and framing Maleficent in order to start a war between the two kingdoms and eradicate the fairies once and for all.

While Ingrith's motivations remain muddled (outside just being evil), seeing Pfeiffer ham it up with Jolie as two warring queens is great fun, even if the two share precious little screen time. Their initial meeting is a a deliciously acidic verbal tete-a-tete that lets the two great actresses trade barbs with relish. But the film drags in the middle as Maleficent is separated from the main plot for much of the film, off on a journey of self discovery in the land of her people - the dark fae.

Just as the original Maleficent built in themes of rape and trauma, Mistress of Evil also reaches for real-world relevance by exploring the ways in which those in power distort the truth and weaponize the prejudices of the people in order to exert absolute control. This leads to an attempted genocide whose imagery eerily recalls the gas chambers of the Holocaust. The appropriateness of appropriating such images for a children's film is somewhat suspect, but one can't help but admire the way in which director Joachim Rønning (Kon-Tiki, Pirates of the Caribbean: Dead Men Tell No Tales) attempts to imbue what could have been just another fantasy sequel with a sense of real weight.

Unfortunately much of that weight is undercut by flat staging and unimaginative cinematography, an issue present in many modern Disney films that all seem to be striving for a homogenous "Disney look." The daytime battle sequences are far too brightly lit, the harsh lighting and daylight setting seemingly undercutting the seriousness of its thematic elements. There are some elements to enjoy here, but one can't help but feel that we've seen this film before - more specifically in Dreamworks' Kung Fu Panda 2, which handled its themes of genocide and finding one's place in the world with much more dignity and emotional power. You have to give them credit for taking on relevant themes, and Mistress of Evil does reach some dark places, but in the context of a bright and sunny family-friendly Disney film, it never really has the chance to dig down as deep as its ideas require.