No other film in recent memory has inspired quite as much passionate online discourse as Todd Phillips' Joker. The film has stirred up something of a firestorm of controversy, with supporters and detractors firmly entrenched in their positions between "masterpiece" and "trash." Yet I can think of few recent films less worthy of such debate than Joker. 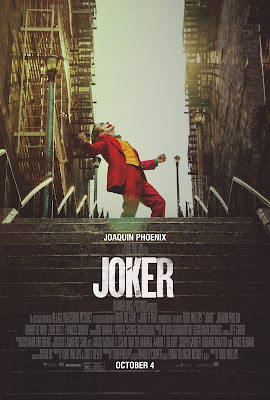 Neither dumb nor brilliant, Joker is an impressive feat of smoke and mirrors, but little more than that. It borrows liberally, and sometimes thrillingly, from the filmography of Martin Scorsese (specifically The King of Comedy and Taxi Driver), but it lacks the soul that always marks a Scorsese picture. As directed by Phillips, Joker wants to be a film about Big Themes and Big Ideas, but it lacks the courage of its own convictions, dipping its toe in the water of social criticism but never fully taking the plunge. The result is a thematically muddled film that lacks a point of view and isn't nearly as profound as it clearly thinks it is.

It all centers around the origins of Batman's greatest nemesis, the Joker, represented in this version of events by one Arthur Fleck (Joaquin Phoenix), a troubled man whose dead-end job as a clown-for-hire constantly makes him a source of ridicule. Arthur dreams of becoming a stand-up comedian, but when a video of his disastrous performance gets showcased on a late night talk show hosted by Murray Franklin (Robert De Niro), it begins to look like the world is conspiring against him, leading Arthur to lash out in increasingly violent ways. It isn't long before his murderous tendencies spark a movement in Gotham City that spirals out of his control, turning him into a kind of folk hero for a political ideal of which he wants no part.

As a whole, Joker is a consistently unnerving,  darkly beautiful evocation of 1970s New York, built around an incredible performance by Joaquin Phoenix whose slow descent into madness is mesmerizing to watch. Ditto Hildur Guðnadóttir's haunting score, whose sickly cello laments are perhaps the film's greatest asset, burrowing under the audience's skin and emerging as a kind of eerie window into the music of the Joker's soul.

When regarded simply as a super villain origin story it's often quite compelling, but it doesn’t hold up to close scrutiny when it tries to tackle BIG THEMES. It mostly works on its own merits but falls apart when applied to our current moment. Joker tries to tackle inequality and class warfare, mental illness, and society's role in creating mass murderers, but it doesn't seem to have any actual ideas about any of those things, blithely throwing in moments that seem like broad attempts to comment on America's volatile political climate, but these are often surface-level nods to real world relevance with nothing to back them up. Phillips seems doggedly determined to have his cake and eat it too, to make a cinematic comment on our world while keeping politics at arm's length. He's playing Scorsese dress-up without bothering to capture the deep understanding and empathy that Scorsese always displays for even his most despicable characters. As a gritty comic book tale Joker mostly works on its own merits, but when it tries to match Scorsese's righteous fury, it feels like little more than a pale imitation.