Musical biopics are a dime a dozen, but continue to be popular with audiences if the runaway success of Bohemian Rhapsody or the strong grosses of the superior Rocketman are any indication. Their familiar formulas coupled with familiar popular entertainers seem to be a winning mix that keeps drawing audiences back to theaters again and again. 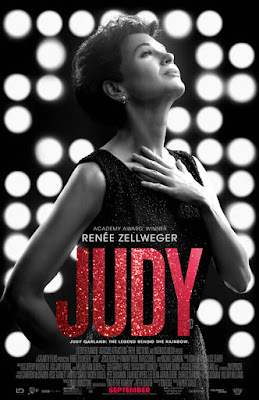 Judy reaches back a bit further than 70s icons Queen and Elton John to tell the story of the last years of Judy Garland (Renée Zellweger), child star, actress, and singer from the Golden Age of Hollywood. By the time we meet Garland in the film, the year is 1968, and her glory years are long behind her. Her final film, I Could Go on Singing, had been released five years earlier, and Garland had become notorious for being an unreliable performer due to her abuse of drugs and alcohol. Judy introduces us to a faded star desperate for one last chance to prove her worth - and to reclaim her children from her ex-husband, Sidney Luft (Rufus Sewell), by earning enough money to provide them with a stable home instead of dragging them from town to town on tour while living out of hotels. She embarks on a residency at a theater in London hoping to recapture some of her former luster, but her dependence on pills threatens to derail her comeback, as well as any chance she may have had to reclaim her family.

Director Rupert Goold gives the film a flashback structure, a common biopic trope, that chronicles young Judy's time at MGM, and how the pressures to remain thin and productive saddled on her by Louis B. Mayer facilitated her addiction to pills and created a world in which "Judy Garland" was merely a fantasy image projected on a screen. Nothing around her was real, not even her name, and she spent a lifetime trying to find something tangible in her life she could hold on to, to no avail. It's a tragic story, but the flashback structure undercuts its power somewhat when dialogue could have given us the same ends. For an example, see the magical realism employed by Dexter Fletcher in Rocketman, which combined the story's past and present in ways that conveyed the essence of Elton John's reality rather than the thudding literalism of Bohemian Rhapsody.

Much of the buzz surrounding Judy has centered around Zellweger's performance, and rightly so; she's uncanny as Garland, delivering a performance that transcends mimicry and digs down deep into a legendary performer's soul. But credit must be given to Goold as well taking a familiar story and imbuing it with enough soul deliver an emotional sucker punch of an ending. It's pure schmaltz, but it takes the film to previously unexplored heights, becoming not just a tale of addiction and loss but of a performer reaching out the screen to grasp immortality. The film could have done well with some streamlining and concision, but the way in which it acknowledges Garland's status as the original gay icon then pays it off in the final moments is a thing of beauty is a move that lifts Judy up from the doldrums of the typical biopic and elevates it to something altogether sublime.

Judy may not cover any new ground, but it has plenty of heart, which along with Zellweger's monumental performance helps it overcome its occasionally choppy structure and awkward pacing. Zellweger is a marvel, but the film takes us out on a high note that sends us out of the theater and over the rainbow, creating a soaring and deeply moving tribute to one of the greatest performers of all time.