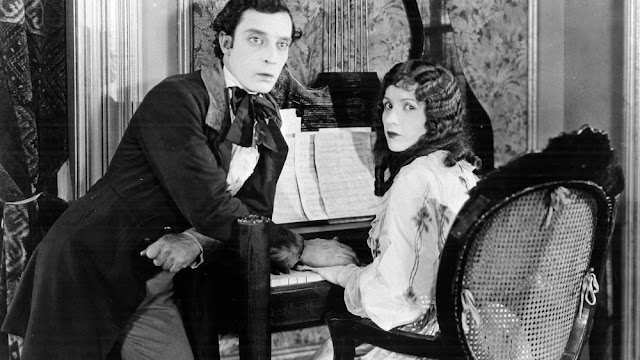 Our Hospitality (1923) was only Buster Keaton's second feature film (the third if you count 1920's The Saphead, which was merely an actor-for-hire job rather than a Keaton original), yet it stands out as one of his finest achievements in front of or behind the camera. 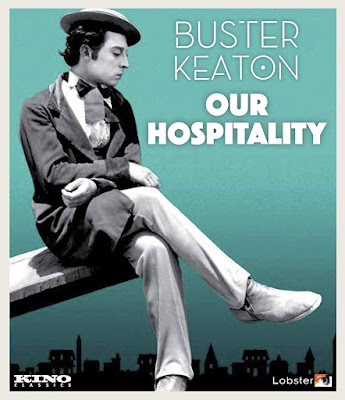 Following Three Ages, which was released earlier the same year and featured three standalone shorts, Our Hospitality was Keaton's first attempt at sustaining a single plot over a feature length, and the result is often astonishing, the work of a filmmaker clearly ready to breakaway from short films and tackle bigger ideas. Keaton took inspiration for the film from the legendary feud between the Hatfield and McCoy families, casting himself as Willie McKay, who was whisked away as a baby (played by Keaton's own son) to New York to escape the wrath of the Canfield family. When he reaches the age of 21, he learns that he's the heir to his family's estate, and returns home to collect his inheritance, only to discover that he's inherited a rundown old shack and a blood debt that the Canfields are determined to collect at all costs. The situation is complicated by the fact that he unknowingly fell in love with a Canfield daughter (Keaton's wife, Natalie Talmadge) on the train, and soon finds himself a guest on the Canfield estate, and the target of their rather unusual hospitality.

While Three Ages poked fun at epic filmmaking, Our Hospitality feels almost effortlessly sprawling, a tale of ancient rivalry set against the back drop of the Blue Ridge Mountains circa 1830. Keaton's attention to detail lends the film a striking period authenticity, almost as if we're watching the film unfold live in the 19th century. He also employs period contraptions to great comedic effect - the train ride home on an original English steam engine is truly hilarious, with Keaton sustaining the comic momentum for nearly 20 minutes with a series of escalating gags that presages his work on The General three years later. His pedal-less bicycle, a "gentleman's hobby horse," is also a wonderfully goofy evocation of his character, a feckless dandy who's about to become the ultimate fish out of water.

It all culminates in a massive climax on a roaring river that seamlessly combines Keaton's breathtaking stunt work with a waterfall set built on a soundstage. Keaton, of course, did all his own stunts, and nearly died several times while making the film, but his lack of regard for life and limb resulting in a thrilling and wildly funny film. The iconic comedian once explained that he moved away from the wild set piece stunts that defined his short films when he transitioned to features, namely because they lacked the verisimilitude he believed necessary to telling a feature length story. But in Our Hospitality he manages to strike the perfect balance between death defying stunts and a compelling story. It's essentially a comedic twist on Romeo and Juliet, but with Keaton's unique charm and a beautifully rendered sense of time and place, it becomes a showcase for one of cinema's great comic filmmakers, whose stone-faced visage and droll sense of humor created a timeless work of art whose unique silliness continues to echo through the ages. It has all been gorgeously preserved on the new 2K restoration on the new Blu-Ray from Kino Lorber and Lobster Films, much of the extraneous grain, dirt, and debris have been removed from the negative and the print looks crystal clear. It's a top notch presentation of one of Keaton's best, and also includes two Keaton shorts and several behind the scenes documentaries. It's a must for Keaton fans and for all enthusiasts of silent cinema.