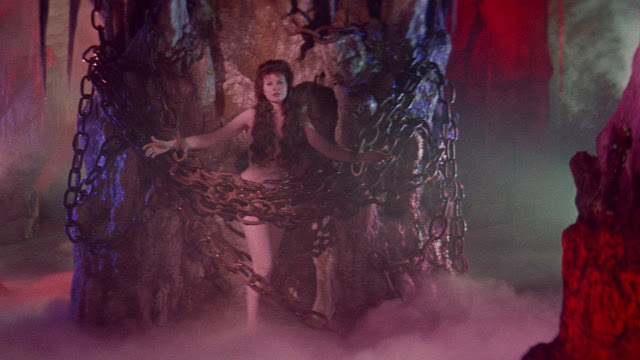 Before Spaghetti Westerns became all the rage in Italy (and abroad), the peplum (or sword and sandal) genre enjoyed a brief period of popularity. Inspired by the American Biblical epics that were in fashion in Hollywood in the 1950s, the peplum films took Greek myths and reimagined them in much the same way that Spaghetti westerns reinvented the American western. 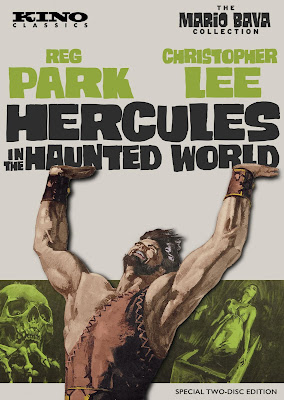 For a time in the early 1960s, there was an attempt to blend peplum with horror, which is how Mario Bava came to helm Hercules in the Haunted World (1961), a sequel to Vittorio Cottafavi's Hercules and the Conquest of Atlantis (1961) starring Reg Park as eponymous mythological hero. After returning home from battle, Hercules discovers that his love, Daianara (Leonora Ruffo), has lost her mind, and that his only hope to save her lies in the depths of Hades. Unbeknownst to him, her guardian, the evil King Lico (Christopher Lee, dubbed by another actor ), has cursed her with the intention of stealing her for himself.

Hercules in the Haunted World starts out very much in the vein of the peplum film for its first 20 minutes or so, as men in togas and sandals clang swords while Hercules throws wagons at them. It's almost as if Bava was a director-for-hire trying to stick with someone else's established style. But then around 20 minutes in the film becomes something else altogether, a dazzling descent into a neon-lit underworld in which Hercules and his faithful sidekick, Theseus (Giorgio Ardisson) must face the trials of Hell in order to retrieve Hercules' lost love. It is here where Bava's signature style bursts forth in full force, as the peplum trappings fall away to reveal a full-fledged horror film. While Hercules isn't as boldly inventive as Bay of Blood or Black Sunday, it represents an eerie, surreal vision of the afterlife as only Bava could have envisioned it.

The new Blu-Ray from Kino Lorber also includes the British version of the film, Hercules in the Center of the Earth, as well as the original Italian language version (which features Lee's real voice). The bright colors really pop, as Bava often combines two strong, contrasting colors in one frame to create an image of striking depth and garish beauty. It's an engaging twist on a genre that was already becoming tired by 1961, made fresh again by Bava's own unique sensibilities.