While perhaps best known to general audiences as an actress in films like High Sierra and They Drive by Night, Ida Lupino also had a successful career as a director at time when the profession was very much seen as a man's job. Lupino became the only woman to helm a classic film noir (1953's The Hitch-Hiker), and even founded her own independent production company, The Filmmakers, along with her husband, Collier Young, with whom she co-wrote many of her film's screenplays. 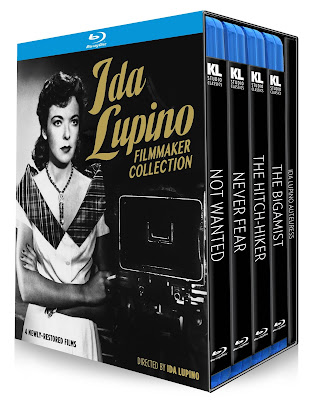 It was with The Filmmakers that Lupino flourished as a director, cranking out low-budget "issue dramas" that took sensational material and embed with with a heart and soul. Lupino wasn't unlike Val Lewton in that regard, although her pared down, steely style more closely resembles the work of Raoul Walsh, who directed her in several films. Yet Lupino's lurid subject matter wasn't imposed on her by some studio head out to make a quick buck - she was the studio head, and she had a knack for taking juicy, ripped from the headlines subjects - teen pregnancy, hitchhiking murders, bigamy - and turning them into cinematic gold.

Yet unlike many similar films of the late 40s and 50s, which took a "there but for the grace of god go I" point of view toward societal issues, Lupino's films replaced pity with empathy, and she treated her characters with compassion rather than judgement.  Her first film, Not Wanted (1949), is the perfect example of the sense of compassion Lupino brought to her work. The story of Sally Kelton (Sally Forrest), an unwed mother who falls for the wrong man, a smooth-talking piano player (Leo Penn, father of Sean) with no intention of sticking around, Not Wanted deftly avoids the exploitation aesthetic of many similarly themed films of the period like She Shoulda Said No! (1949). Fearful that she will be viewed as "damaged goods" and ruin her reputation, Sally gives her baby up for adoption, a decision she regrets so much that it begins to tear her life apart, leading to a rash decision that lands her in hot water with the law.

It's a remarkably sensitive handling of the subject matter for 1949. Naturally, marriage is seen as the ideal for Sally, so a romantic subplot involving a young man (Keefe Brasselle) who loves her no matter what provides a backbone for the film. Yet it never feels as though Lupino is looking down on Sally for her decision. It's as if she understands and sympathizes with her plight and refuses to judge her for her actions. It's a remarkably sensitive film, one that seemingly runs against the grain of the social mores of 1949. Neither celebrating or condemning Sally's actions, it simply asks for compassion and understanding, and Lupino displays it in spades.


Later that same year Lupino tackled another social problem, and this time it was one she was intimately familiar with. Never Fear (1949) tells the story of an energetic young dancer named Carol Williams (Sally Forrest), who is diagnosed with polio at the height of her career. Faced with losing her ability to walk and never dancing again, she withdraws from the world, including her fiancé and dance partner, Guy Richards (Keefe Brasselle). Once she arrives at the Kabat-Kaiser Institute for treatment, she meets Len Randall (Hugh O'Brien), who is likewise stricken with polio. There she is faced with a choice, leave her abled fiancé for someone who better understands her plight, or leave Len and try to re-integrate into the world she once knew.

Never Fear is an often tough-minded film that has the gloss of a "human resilience" drama, but in Lupino's steady hands it reaches much deeper. Carol spends much of the film not wanting to be a burden on anyone, and finds a kindred spirit in Len, a man who has accepted his disability and refuses to let it hold him back. But he can't give her the life she once dreamed of, which makes Never Fear a much thornier film than it seems at first glance. But like Not Wanted before it, the film refuses to simply pity its polio stricken protagonists, and allows Carol to reclaim agency over her own life - even if she (and the audience) are ultimately unsure about the decision she finally makes.


When asked to make a favorite among her own works, Lupino often pointed to The Hitch-Hiker, and indeed, it is a feverish noir thriller that helped perpetuate a fear of hitchhikers that has lasted to this day. Its protagonists, Roy Collins (Edmond O'Brien) and Gilbert Bowen (Frank Lovejoy), have the misfortune of picking up murderous hitchhiker Emmet Myers (William Talman) while on a fishing trip in the mountains. Myers forces them to drive him into the Mexican desert so he can make his final escape, but threatens to kill the two men if he catches wind on the radio that the police have connected their disappearance with his string of kidnappings and murders.

It's a white-knuckle, edge-of-your seat high wire act that showcases Lupino's unique ability to take inspiration from real-life events (in this case, hysteria over hitchhikers) and turn them into cinematic gold. It is here that her direction most resembles Walsh's, straightforward, assured, and gritty, awash in seedy crime genre suspense but almost uncannily focused on the plot and hand. Lupino's direction is economical but always empathetic, placing her focus on the slowly unravelling victims and their mounting realization that their lives are on the line, rather than the terrifying villain (who's always watching even when he's sleeping thanks to a bum eye that never closes). It's as grim and efficient as anything Walsh ever directed, and firmly puts Lupino in the realm of some of the best noir directors.


The last film in the set, 1953's The Bigamist, is perhaps its most difficult. The film centers around a man named Harry Graham (Edmond O'Brien) who is trying to adopt a baby with his wife, Eve (Joan Fontaine) because she is unable to conceive children. But as the adoption agency investigates the family to determine their suitability, they uncover a dark secret - Harry is actually living a double life, with another wife (Lupino) and child in another city where he often travels for business. What seems like a pretty straightforward issue becomes disarmingly complicated under Lupino's direction, who refuses to treat this as the issue of black and white morality that it appears to be.

She actually makes us feel sympathy for Graham, as she takes what could be seen as an "aw man I'm sorry I got caught" excuse and delves deep into the roots of what caused his betrayal. In The Bigamist, he isn't seen so much as a rotten philanderer as a complicated and conflicted man who got in over his head. "I don't know whether to despise you or feel sorry for you," the inspector says at one point. And the audience is in much the same position. While viewers' reactions will likely vary greatly, Lupino refuses to take sides, and the result is a film that exists in a surprising moral gray area rarely seen in 1953. It's all made even more fascinating by the fact that Lupino and her husband/co-writer Collier were going through a divorce while the film was being made, with Collier's new girlfriend, Joan Fontaine, playing opposite Lupino as the other woman. The Bigamist displays an incredible restraint and sense of forgiveness that showcases Lupino's unique humanist talents.

Putting all four films together in one set really shines a light on one of the 20th century's most unheralded woman filmmakers. Each film has been beautifully restored for the Blu-Ray release. While Lupino was not a flashy visual stylist, her deceptively simple compositions belie a deep understanding of character psychology. This is Kino's most impressive release of 2019, and an essential set for any cinephile.


Now available on Blu-Ray and DVD from Kino Lorber.