Cinema history is full of gimmicks designed to lure audiences away from their television sets and into theaters. Some, like Cinemascope, stood the test of time. Others, like Cinerama, did not, while 3D has enjoyed a few short-lived revivals over the decades, it's never proven particularly enduring. In the age of streaming, filmmakers and studios continue to try to find ways to keep the theatrical experience relevant, setting it apart from what audiences can experience in their own living rooms. 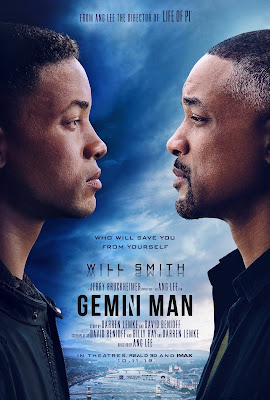 Ang Lee has been on the cutting edge of the quest for ever more impressive cinematic technologies for several years now. He, along with Peter Jackson, seem to have cast their lot with High Frame Rate photography. In the case of Lee's latest film, Gemini Man, that means the film is running at 120 frames per second, a huge jump from the usual 24 frames per second of the typical feature film. The effect is one of hyperrealism and stunning clarity - some have compared it to watching a soap opera because the typical "flickering" effect our eyes are accustomed to while watching a film is missing, making the action smoother and more fluid. This can take some time for the eyes to adjust to, things tend to look like they're moving too fast because our eyes aren't having to work as hard.

The effect is certainly realistic, but one can't help but wonder - what's the point? There are parts of Gemini Man that look so tangible and real that it's as if we could reach out and touch Will Smith - but this fidelity to absolute realism seems to erase the cinematic artistry. Sure it looks real, but where's the style, the visual wizardry, the panache? Gemini Man looks real but lifeless, even flat, a disappointing turn of events from a filmmaker like Lee who is an accomplished visual stylist. It's a feat of technical competence rather than cinematic artistry - and therein lies the problem at the heart of the HFR technology - in order to make it look real one must erase everything about a film that makes it cinematic, and if they story is weak then there's really nothing to go on. It's nothing but empty calories.

The story of Gemini Man isn't strong enough to step up and carry the film. Will Smith stars as assassin Henry Brogen who is targeted by his own government after one of his targets turned out to be an ally that rogue elements within the organization had framed for liquidation. The agent they send to kill him, under the auspices of the clandestine Project Gemini, is an exact clone of Henry; younger, blessed with all his skills but without his worldweary pain. As Henry fights to stay alive and clear his name, he must also confront himself, both literally and figuratively, and come to terms with his life of death and destruction, leading to a final showdown with the man who taught him everything.

There's an interesting idea here, in which a man-vs-self conflict gets played out quite literally as a man confronts himself, his past, and eventually his "father," in order to come to terms with the man that he has become. Yet the film is hampered by a generic script and an overall sense of blandness. Lee knows how to direct an action sequence, and the centerpiece motorcycle chase is indeed spectacular, but the film becomes more and more insular, leading to a climax in the aisles of a hardware store that feels oddly small scale. Smith's doppelgänger, a wholly digital creation rather than a product of de-aging technology, looks stunningly real when he's not moving, but his facial movements betray his digital nature. There's just something off about him that never quite feels reel, and it becomes a distraction from Smith's performance as the real Henry. Clearly computer generated visual effects have improved at an impressive rate, but they still can't quite create a fully believable human character, no matter how real he looks when he's standing still.

Lee has always been a strong filmmaker, which makes it all the more surprising that Gemini Man is as weak as it is. It feels like a showcase for emerging cinematic technologies rather than a film in its own right. It never fully grapples with the psychological conflicts at its center in its quest to impress the audience with its technical prowess, and the effect cold and anonymous, lacking any semblance of personality or any real sense of creative passion. It's proof-positive that impressive technology can only carry a film so far.