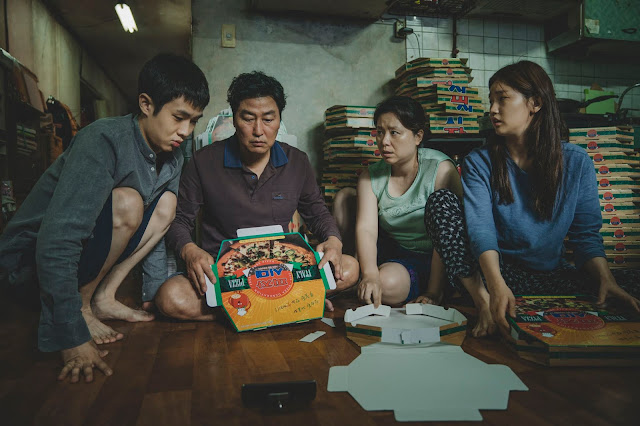 There are few filmmakers that can so deftly juggle wildly disparate tones and genres as South Korea's Bong Joon Ho. Bong's films work on so many layers, peeling back genre trappings to reveal piercing social critiques embedded within their deft blending of cinematic styles. Whether it's a monster movie with a soul (The Host), a story of a girl and her giant pig who take on the meat industry (Okja), or an eerily prescient thriller about a train turned refugee concentration camp (Snowpiercer), Bong's sensibilities have always rested with the marginalized and forgotten people of the world. 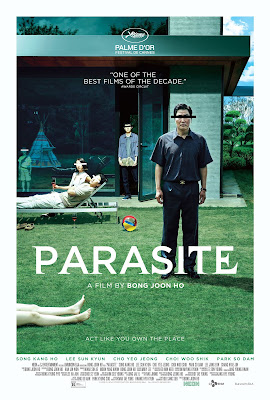 In his latest film, Parasite, which won the Palme d'Or at this year's Cannes Film Festival, Bong builds his narrative around a lower class family whose employment prospects look increasingly dim. Having just lost their job putting together pizza boxes for a local pizza company, and their dingy basement apartment becoming little more than a prison with bad wi-fi, they begin looking for alternative forms of employment. Opportunity knocks when son Ki-woo (Choi Woo-shik) finds a job working as a tutor for Da-hye (Jung Ji-so), the daughter of the wealthy Park family, he jumps at the chance. It isn't long before he's found a way to slyly recommend the rest of his family members for positions in the household. First his sister, Ki-jung (Park So-dam) as the art therapist for spoiled son, Da-song (Jung Hyeon-jun), who in turn conspires to get the family chauffeur fired in favor of her father, Ki-taek (Song Kang-ho). They at last secure family matriarch, Chung-sook (Chang Hyae-jin), a position as the maid after convincing the wealthy mistress of the house (Cho Yeo-jeong) that her old house keeper (Lee Jung-eun) is hiding a nasty case of tuberculosis.

Safely having infiltrated the Park family's sumptuously appointed home, their family connections safely hidden, Ki-taek's family is seemingly on top of the world, all gainfully employed and funneling as much of the Park's money toward their own. But when the family's old maid returns to the house one rainy night while the Parks are on vacation, she reveals a dark secret that will upend all their lives, and change the dynamic between the two families forever.

On the surface, the title Parasite seems to refer to Ki-taek's family, whose simple act of subterfuge helps them trick their way into the Park family's lives. But as the film goes on, it forces the audience to re-contextualize and re-analyze everything it has seen before. Is Ki-taek's family the parasite, or is it perhaps the Park family, whose wealth is totally built on the backs of the poor, completely dependent on working class stiffs to do their bidding. Bong never exalts Ki-taek's family as some sort of paragon of working class martyrdom, nor does he portray the Parks as mustache-twirling corporate villains. Instead, they form a kind of symbiotic relationship, completely dependent on one another for survival, and yet only one side is truly being exploited, have-nots kept underground in squalor in order to prop up the haves who quite literally live above.

Parasite begins as a seemingly light-hearted family comedy, Ki-taek's brood spending their time desperately searching for the one spot in the house with a wi-fi signal, and chasing off drunks who constantly piss in front of their window. Even their ingratiation with the Park family plays a bit like a farce. But Bong slowly turns the film into something else, a dark thriller built around an outlandish premise that finally comes to a head in a shocking eruption of violence, before switching gears yet again into a kind of reflective socially conscious tragedy. It's a film very much rooted in class consciousness and income inequality, an issue that continues to rise to the forefront not only of our own politics here in the United States, but in countries around the world. Bong masterfully blends these divergent genre elements into one wildly original whole, crafting an incisive indictment of income inequality and the wide gulf between the classes that is as bitterly funny as it is achingly sad. It's a tale of two families living side by side who couldn't be further apart, with one family propping up and enabling obscene wealth they could never hope to accumulate in a thousand lifetimes. That's the real tragedy at the heart of Parasite, it may be about tensions between the haves and the have-nots, but it's a stark reminder that the have-nots need the haves just as much as the haves need the have-nots, and that such extreme inequality can only ever lead to simmering resentment that will inevitably boil over. And that leaves us all to question just who the real parasites are.