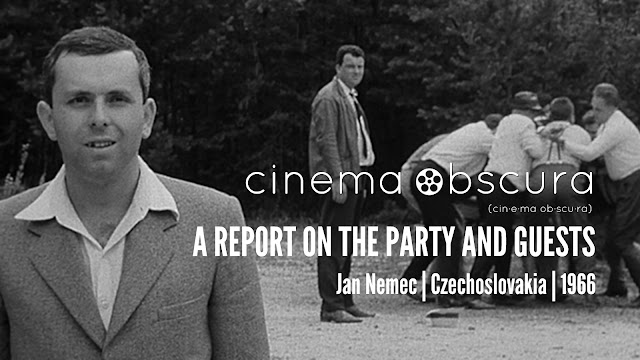 Cinema Obscura is a regular feature at From the Front Row, highlighting little-known films that I believe need a second look. The mission of Cinema Obscura is to bring attention to hidden gems and forgotten masterpieces from around the world that readers may not otherwise have had a chance to discover.

I've found myself returning to this film often in the months since I first watched it, yet I haven't been able to bring myself to sit down and write about it. There's something so disturbingly relevant about Jan Němec's A Report on the Party and Guests (1966) that echoes through the decades and seems to eerily presage the global rise of rightwing nationalism and fascism across the globe in the last years of the 2010s. 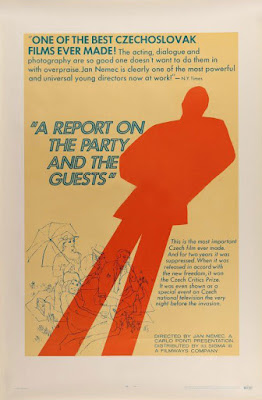 Němec's film was originally banned in its native Czechoslovakia. The censors declared it "to have nothing in common with our republic, socialism, and the ideals of Communism." Perhaps they were right, A Report on the Party and Guests is not particularly socialist in nature, although in the United States in 2019 its themes certainly seem leftwing. But the heart of the film lies not in leftwing or rightwing politics but in a repudiation of totalitarianism of all stripes, be they communist or capitalist in nature. Here, Němec brutally lampoons human nature and our penchant for unquestioning compliance before authority, an unfortunate trait that gives would-be dictators carte-blanche to establish absolute power.

The film follows a group of friends out for a carefree afternoon in the country. But their idyllic picnic is soon interrupted by a marauding wedding party that orders them into non-existent corals and begins jovially issuing nonsensical orders. The guests all willfully comply with a sense of curious bemusement. Held captive in an invisible cage, they immediately adhere to the rules set forth by their captors, who have no weapons and no obvious sense of authority over them whatsoever. The only thing holding them captive is their own compliant mentality.

Despite the smiling faces of and apologetic attitude of those in charge of the wedding party, who insist that they only have the best interests of their guests at heart, the film becomes more and more sinister as the ill intentions of the captors becomes more and more apparent. No matter what they say, this is not some benevolent invitation to eat drink and be merry, it's an egregious abuse of power, power that they were never granted in the first place. And yet all the while, the guests smile and accept every apology and explanation for their hosts' bad behavior, never thinking that they may be frogs trapped in slowly boiling water.

This blind acquiescence before power is the dark heart of the film. Němec employs a gentle sense of surrealism that recalls Luis Buñuel's The Exterminating Angel (1962), as the demands made by the party's smiling hosts become more and more bizarre. It has the tone and the appearance of a comedy, a charming romp in the woods where the protagonists stumble across a party. And yet the film is almost unbearably unnerving, and it isn't long before it becomes profoundly uncomfortable, as we continually question why these people don't just say no - even when the consequences of doing so become clear, they still accept the apologies of the host for their bad behavior and carry on as if nothing happened. Why won't they just leave? We wonder. 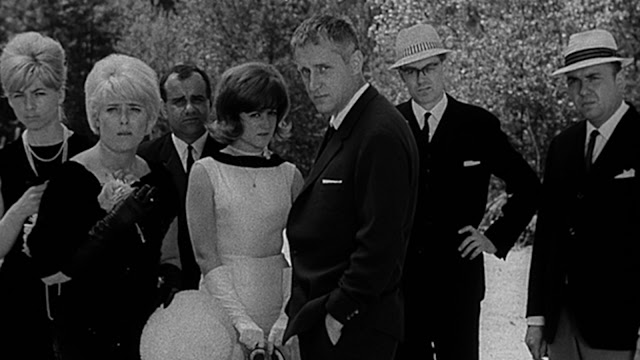 But then we look at the world around us. Our leaders refuse to do anything about the dire warning of climate change. Our president is a proven racist, and criminal, and our media tries its best to normalize him, accepting his continued excuses and blatant lies as a new kind of reality. And suddenly what Němec is trying to say becomes painfully clear. We want to accept authority, be herded like sheep - it's comforting to believe the lies, to believe in the benevolence of those to whom we grant power over ourselves. Suddenly, the actions of the characters in A Report on the Party and Guests don't seem quite so bizarre. We always have the power to stop tyrants - they only have as much power as we let them have. And yet we carry on blindly, content with the status quo, unwilling to be the first one to rock the boat until we're too far in over our heads. It's a brilliant, chilling film, an incisive satire of humanity's relationship with authority that I'm sure ruffled a few feathers with the powers that be in Czechoslovakia at the time.

As a follow-up to his explosive Holocaust drama, Diamonds of the Night, A Report on the Party and Guests showcases Němec at the height of his powers, a major player in world cinema on the vanguard of the Czech New Wave. Yet the film, along with Oratorio for Prague, his 1968 documentary chronicling the Prague Spring uprising, would make enough enemies for him that he wouldn't be allowed to make another film until after the fall of the Communist regime in 1990. It's hard to imagine the loss to cinema that this represents, but for a brief moment the Czech New Wave represented some of the most radical and vital cinema in the world, and nowhere is that verve and vigor more plainly apparent than in this film, a hidden gem that stands tall as one of the most razor sharp indictments of totalitarianism ever produced.
Email Post
Labels: cinema obscura