Despite the fact that John Rambo had already been given the nostalgic sequel treatment back in 2008 with Rambo, rumors persisted of a fifth entry in the series. Some of the more outlandish ones even featured Rambo tangling with a Bigfoot-like creature. Thankfully (or, perhaps, unfortunately) that version of Rambo V never came to pass, and it seems the success of Sylvester Stallone's Oscar nominated return to his iconic Rocky Balboa character in Creed and Creed II convinced him to pick up Rambo's serrated knife one last time. 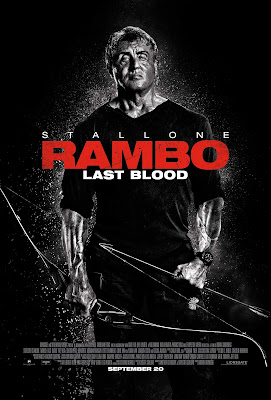 The result is Rambo: Last Blood, which picks up about 10 years after Rambo's return home at the end of the last film. Rambo has taken to raising his niece, Gabrielle (Yvette Monreal) after the death of her mother. It seems as though the old soldier is at peace at last, that is until Gabrielle sneaks off to Mexico to track down her deadbeat father who abandoned her as a child. When Rambo heads down to retrieve her, he discovers that she has been kidnapped by sex traffickers and held captive by a ruthless cartel. What follows is what Quentin Tarantino might call a "roaring rampage of revenge," a brutal, bloody descent into darkness that pushes Rambo to the very edge.

The climax of the film is essentially a gory version of Home Alone, in which Rambo booby-traps his entire farm to block the cartel's eventual siege. It's every bit as violent and over-the-top as one would expect given how graphic the last film was, but director Adrian Grunberg (Get the Gringo) rushes through each kill so that none of the deaths really have time to land. None of them have weight, and we fly through the traps so quickly that the anticipation of each one seems all for naught. We're a long way from the original First Blood (1982), in which Rambo carefully stalked those who wished to do him harm; here they go out in a last minute barrage of carnage that lacks the visceral impact they were clearly intended to have.

Revisting First Blood in 2019 is an interesting experience, because it isn't the violent symphony of blood and guts that the later sequels became. In that film Rambo is a shell-shocked Vietnam vet who returns to a country that sent him to die in the jungles of a foreign nation for no reason, only to refuse to take care of him when they bring him back. He was abandoned by the very nation he served, and his enemies are the American authorities, policemen who set out to enact their own wrong-headed brand of justice on a long-haired hippie. It's an anti-establishment film, and Rambo features almost no trace of the Reagan-era machismo for which he would become a symbol in later films.

In Last Blood there is no redemption, no atonement, no self-reflection. Just cold, hard, bloody revenge. Stallone isn't patricularly interested in examining the legacy of the character and culture that made him popular. But really we’re all just here to see him blow bad guys up, which he does with gusto. Rambo is pure caricature at this point so the fact that it doesn’t return to the more thoughtful roots of the original doesn’t feel like a great loss. It delivers on its promise to see Stallone wreak bloody carnage. It is what it is and it’s perfectly enjoyable. The script is weak, and the supporting performances are all uniformly B-movie quality (with the exception of the great Adriana Barraza and Paz Vega), but when Stallone gets out that knife and does that scowl he does so well, this thing is actually pretty great. We all know why we're here, to watch Rambo kill some bad guys and exact bloody vengeance upon his enemies, and in that regard Rambo: Last Blood delivers. It's a loud, tasteless, and bloody good time that never feels like it's as good as it could be, but manages to be just as much fun and it should be.