The Goldfinch is proof that no one should ever make year-in-advance Oscar predictions the day after the ceremony.

It certainly looks good on paper. Based on the Pulitzer Prize winning novel by Donna Tartt, directed by Brooklyn helmer John Crowley, and starring Nicole Kidman, Ansel Elgort, Luke Wilson, and Sarah Paulson; The Goldfinch has a pedigree that seems to scream Oscar. And therein lies the problem; it's a prestige project with awards on its mind, but it's also a lumbering, self-serious drama that neither moves nor entertains, resulting in perhaps one of the most ill-conceived Oscar hopefuls in recent memory. 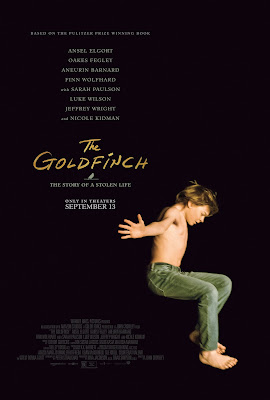 The film centers around the life of a young boy named Theo Decker (Oakes Fegley), whose mother is tragically killed in a museum bombing. Bounced around from family to family, Theo often feels like a boy without a home, that is until fate returns him to an antique store where he first went on a dying man's last wish. He grows up and becomes an antique dealer (now played by Ansel Elgort), yet is haunted by his past, and an impulsive act that lead him to steal a priceless painting called "The Goldfinch" from the museum in the wake of the bombing, a secret he has carried with him for decades that is about to lead him into a world of drugs and crime.

There's a lot going on in The Goldfinch  and Crowley and screenwriter Peter Straughan attempt to cram as much of Tartt's lengthy, nearly 1,000 page novel into two and a half hours as possible. Yet it all feels calculated and contrived in the extreme, its convoluted screenplay seemingly devoid of real human feeling or narrative coherence. There's not a true note in its entire bloated running time. Crowley fills the film with awkward pauses that, rather than enhancing the drama, merely throws off the pacing, making an interminably long film feel even longer. The performances are almost all stiff and unnatural, and since much of the narrative is built around preternaturally precocious children, the momentum stops cold, saddling the young actors with ponderous material that they are mostly unable to handle, making the film's myriad pauses between the dialogue seem all the more unnatural.

The film only manages some semblance of life with the arrival of Stranger Things' Finn Wolfhard, whose performance as a good-hearted Ukrainian delinquent gives Fegley a chance to loosen up and the audience a much-needed respite from the film's oppressive gloominess. Yet as the film continues on, it attempts to build an air of mystery around the Goldfinch painting not unlike that of Citizen Kane's Rosebud, yet the Goldfinch feels much more like a device than the metaphor it probably comes across as on the page. So much is built up around the painting, yet in the end it feels like much ado about nothing, a world of sadness and overwrought dramatics over something that ultimately matters very little. Audiences who have not read Tartt's novel may find themselves scratching their heads as the film lumbers toward a violent out of left field conclusion that rings completely false, never quite reaching the level of emotional depth for which it is clearly reaching. For all its grief and portent, The Goldfinch is a remarkably shallow film, one that never has the courage to address the issues of childhood trauma it raises, instead reaching for surface level platitudes centered around a poorly conceived macguffin. Not every great novel needs a big screen adaptation - because this  cold, tedious piece of Oscar bait seems like it probably should have stayed on the page.