Great filmmakers have often looked to the stars for inspiration. Despite the often unfairly low-rent reputation of the science fiction genre, it has historically provided boundless ideas for some of the greatest filmmakers of all time - Georges Méliès, Stanley Kubrick, Andrei Tarkovsky, Robert Wise, Jean-Luc Godard, Rainer Werner Fassbinder, Ridley Scott, Steven Spielberg, Alfonso Cuarón, Christopher Nolan, and Claire Denis have all made masterworks among the stars. The latest auteur to turn their eyes toward the heavens is James Gray, a filmmaker long worshipped by cinephiles but one who has never really caught on with the general public. 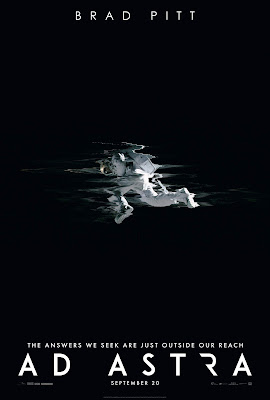 For him to step into such a large-scale studio film  is something of a surprise, but certainly not an unwelcome one. The resulting film, Ad Astra (To the Stars) is perhaps the finest film released by a major studio in wide release in recent memory, one of the last to be produced by 20th Century Fox before it was bought by Disney earlier this year. It's the kind of thoughtful adult drama the likes of which are rarely seen in multiplexes anymore, one that is really nothing like its action packed trailers, instead diving deep into the human psyche and the effects of generational trauma, pointing the action inward even as the camera points to the stars.

Brad Pitt stars as Roy McBride, an astronaut tasked by United States Airforce to travel to Mars to send a top secret communique to a remote vessel in orbit around Neptune. It is there that the Air Force believes that McBride's father, Clifford (Tommy Lee Jones), a legendary hero long thought lost during a top secret mission to search for alien life known as the "Lima Project," is actually behind a series of magnetic pulses coming from the outer reaches of the solar system that are threatening all life on Earth. Upon arrival on Mars, however, McBride starts to question the Air Force's official account of what happened to his father and to the Lima Project, and sets off on a mission of his own to track down the man who inspired him, yet abandoned him in pursuit of other life in the cosmos. Determined to learn the truth for himself, McBride may ultimately learn more than he ever bargained for.

In the most simplistic terms, Ad Astra feels like a Terrence Malick film with space pirates, a probing, philosophical film filled with lyrical musings about the nature of life, set against the epic backdrop of a world whose greed for natural resources has spilled over into outer space, as nations vie for supremacy not only on Earth, but on the moon as well. It is an adventure film but mainly in the sense that it’s about the mystery of exploration, but Gray’s aim is always much deeper than that.


Gray paints on such a grand scale but the film never loses its intimate focus. That’s perhaps its greatest irony - Gray employs breathtaking cinematography and stunning special effects to tell a story that stands in stark contrast to its sweeping appointments. It is a deeply introspective film, the juxtaposition of its inner focus against a magnificent backdrop reinforced his central theme - even in the face of the loftiest of human achievement, nothing is more powerful or more important than human connection. What is the point of it all if we don't have love?

Yet, perhaps most fascinatingly, Ad Astra seems to be in direct conversation with Gray's previous film, The Lost City of Z. Both films are about adventurers, men who sought to go beyond the reaches of what conventional wisdom deemed possible. Yet The Lost City of Z was essentially built around the old axiom of “Shoot for the moon. Even if you miss, you'll land among the stars.” Ad Astra asks, “what if we land among the stars and there’s nothing there?” It’s a gripping rumination on passion, both artistic and scientific, as well as ambition at the expense of personal growth. In fact, Ad Astra is really like the mirror image of Lost City of Z  as if Gray is in dialogue with himself, arguing, reaching, searching, probing; wondering if perhaps the final frontier isn't in the stars, but in the depths of the human soul.

Its protagonist, like his father before him, is a man who put work above all, his singular drive to go higher, farther, and faster leading him to completely forsake his family. In the end it’s seemingly all for naught. What if we truly are alone in the universe? What if we spend our entire lives looking for something more, something greater than ourselves, and in the process miss, to paraphrase Dorothy Gale of Kansas, the beauty of what’s in our own back yard? Whether it’s over the rainbow or beyond the reaches of Neptune, Gray can’t help but remind us that nothing is so grand and mysterious and worth our time as love. Ad Astra is one of the best works of science fiction this century.