Though not a horror film in the strictest definition of the term, you're likely to find no more horrific cinematic experience this year than Jennifer Kent's The Nightingale. 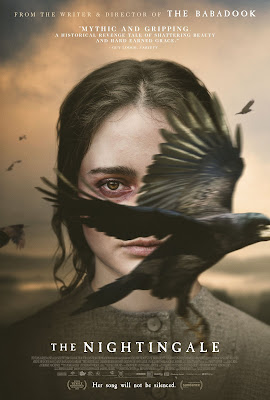 A revenge thriller in the tradition of Bergman's The Virgin Spring, as well as exploitation classics like I Spit on Your Grave, and The Last House on the Left, The Nightingale takes place in Australia in 1825, where a young Irish convict named Clare (Aisling Franciosi) is working off her debt to society under the watchful eye of ambitious British officer, Lieutenant Hawkins (Sam Claflin). Stuck in a rural provincial outpost with a crew of barely competent misfits, Hawkins dreams of a promotion in a city up north, while Clare dreams of being given her long-promised release papers so she can move away and start a new life with her husband and newborn baby. But after a savage act of violence changes everything, Clare finds herself chasing Hawkins through the Australian outback, with only an aboriginal tracker named Billy (Baykali Ganambarr) for a guide.

The Nightingale is, by design, a difficult film to watch. Its brutal sexual violence and unrelenting bleakness will likely be hard to stomach for many viewers, as well its should. Yet none if it is without purpose, because the heart of Kent's film is one of relentless rage, a roiling, seething cry of anger at a nation built on deep-seated racism and misogyny. Even our protagonist, a victim of near-constant sexist violence, refers to her black guide as "boy," echoing the racist language of the film's white villains. As the film wears on, she begins to realize the true depth of the racist violence waged against his people, a cruel erasure and genocide wrought upon a stolen land, and the truth becomes painfully clear - they're both in the same boat, victims of systemic oppression at the hands of white men.


Kent, whose previous film, The Babadook, handled similarly thorny emotional territory with aplomb, probes the depths of patriarchal colonialism and the bloody birth of Australia (and western civilization) as we know it. Her film may be set in Australia, but the thematic core is universal - colonialism was built on the backs of black bodies, that whiteness is inherently built up by the subjugation of women and minorities, and propped up on an ideology centered around patriarchy, misogyny, and racism. The Nightingale isn't here to comfort us about this fact. It's here to confront us, to hold up a mirror to our own complicity in a system born from such hateful violence. Colonialism is, in essence, the rape of the natural world, and that is why the film's shocking scenes of rape and violence are so essential yet so difficult to stomach.

Every act of violence in the film lands like a sucker punch because they feel so real and honest. Kent doesn't shy away from our barbarous past, and refuses to let the audience off the hook, with her harsh close-ups and boxy cinematography that seems to trap its characters from all sides. She doesn't blink, and neither should we. Yet what makes the film so effective is that Kent understands that while violence may be the only language colonialists truly understand, humiliation and emasculation is the true fear of the petulant man-children who propagate it. It's their ultimate Achilles heel, even if violence ultimately becomes necessary to completely eradicating it. The Nightingale is a work of austere beauty, a ferocious tale of revenge and national turmoil, taking a story of limited scope and turning into a sweeping indictment of the very civilization in which we live.  It's an uncompromising howl of righteous fury anchored by a haunting performance by Franciosi, whose grim determination comes to represent the plight of all oppressed peoples who have at long last had enough.