Picking up 27 years after the first It (2017), It: Chapter Two covers the second half of Steven King's massive novel, as the now adult members of the Losers Club return to Derry to put an end to the evil clown, Pennywise (Bill Skarsgård), once and for all. 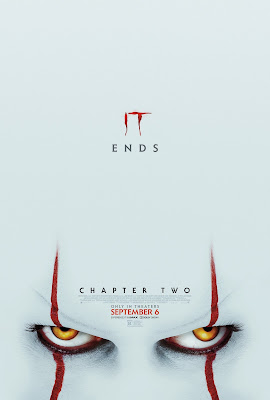 It is, by its very nature, a very different film than It; whereas the previous film was often more of a coming-of-age film than a horror film, with its exploration of childhood fears and traumas, It: Chapter Two is more about dealing with those childhood traumas and reconciling with the events that scarred you in the past. The kids from the original film all return for flashbacks, but for the most part they are replaced by their adult counterparts, who are easily the strongest aspects of the film. It is absolutely believable that the children from the first film grew up to be these adults. The MVPs here are Bill Hader and James Ransone, who so thoroughly embody their characters that their relationship becomes the highlight of the film.

Unfortunately the film around them is a mess, a major step down from its predecessor in nearly every way. Clocking in at nearly three hours, the film is far too long, and its epic runtime isn't earned by anything we see on screen. The first half sets the stage well, introducing the new versions of the now familiar characters and re-introducing us to the world of Derry, Maine. It manages to walk a delicate tight rope for a while between creating a sense of dread and warm childhood nostalgia, something the original film did very well. But Chapter Two goes off the rails in the second half, featuring a loud, garish extended climax that's so bathed in CGI effects that the it becomes numbing, an unpleasant visual assault rather than than a creepy funhouse. Nearly every appearance of Pennywise the clown is enhanced with computerized special effects to the point that he loses his eerie humanity, and Skarsgård's unnerving performance is bulldozed under layers of animation.


King's source material is rich with ideas of grappling with childhood traumas, and director Andy Muschietti does try to extrapolate those themes here, but they get lost in the film's nearly incoherent second half, with its almost unbearable lighting and over-the-top action. Benjamin Wallfisch’s overbearing score is filled with stingers and soaring choirs that smother the action and telegraph the scares to the point that it almost becomes sonic wallpaper. It almost worked better as a coming of age film than it did a horror film, but It: Chapter Two lacks that element. It was about children overcoming obstacles and facing their fears, It: Chapter Two is about those children facing their traumas as adults, but this idea is seemingly lost in a messy, scattershot film that features a few great set pieces but never seems to come together as one whole. The pathos of childhood friends reuniting to face the shared pain of their past is quickly lost by a film that becomes all too infatuated with its monstrous embodiment of evil and his arsenal of red balloons and special effects, all of which quickly lose their power when so frequently pulled out into the daylight.

There are certainly things to like about It: Chapter Two -  it's uniformly well-cast and well-acted, and it integrates the scenes of the children with the scenes of the adults with a moving sense of weight and longing for lost childhood; but its out of control runtime needs a major trim to better focus it on the characters rather than its increasingly desperate attempts to scare a numb audience. True horror is often found in stillness, and Muschietti's ever roving camera tends to go for epic grandiosity when it should be more grounded. That's really its biggest problem - King created such indelible characters that the film unfortunately loses sight of, trying to paint on a sweeping canvas when it should have looked inward for the source of its pain and trauma. Pennywise as the specter of childhood trauma and the embodiment of fear is much more terrifying than as a giant, wisecracking CGI spider.