If the advertisements for Lorene Scafaria's Hustlers are any indication, then it's just another breezy September comedy featuring Jennifer Lopez, Constance Wu, and Cardi B as criminal strippers who get into some wacky antics that will be forgotten as soon as the leaves turn. What the trailers did not lead us to expect, in their quest to distill the film to a few money shots to put butts in seats, was a surprisingly incisive critique of American capitalism and a scathing indictment of the careless wealthy hucksters who derailed our economy in 2008. 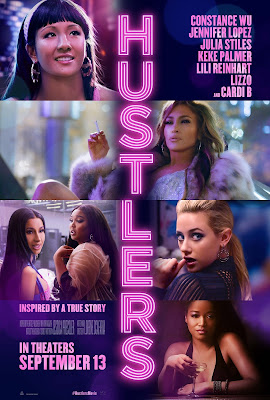 Based on a true story chronicled in journalist Jessica Pressler's article, “The Hustlers at Scores,”  Hustlers follows a group of high class strippers who, in the wake of the 2008 financial crisis, decide to get their money back by drugging promiscuous Wall Street bankers and draining their credit cards. Wu stars as Destiny, an impressionable young dancer who is taken under the wing of Ramona (Lopez), a kind of club den mother who can work a pole (and a hustle) like no one else. Struggling to put food on the table while also taking care of her elderly grandmother, Destiny finds herself with nothing in the wake of the financial crisis, but as the money dries up and she finds herself working dead-end jobs for creep bosses, she and Romona cook up a scheme that will get them back on top, and teach the pompous jerks who ruined them a lesson they won't soon forget.

Using handheld cameras and dazzling neon lights (and the year's most exuberant  soundtrack, featuring such diverse artists as Britney Spears, Janet Jackson, Frankie Valli, and Usher), Scafaria directs with a disarming sense of lyricism, juxtaposing the sparking exuberance of the club with the more monochromatic drudgery of the outside world. She uses this tale of strippers enacting revenge as a kind of metaphor for the financial crisis at large, with the brazen Wall Street bankers as the corporate overlords tossing singles at those they deem inferior, forcing the rest of the world into a dance for their table scraps. Hustlers is as damning a critique of American capitalism as anything mainstream cinema has given us this decade, a film that takes the overly-precious exposition of films like The Big Short and turns it into a dazzlingly entertaining metaphorical attack on the consequences of greed and the exploitation of workers by self absorbed corporations. It's a world where have-nots only exist to prop up the haves, and Hustlers seeks to burn down the system in spectacular fashion.

While much of the conversation thus far has centered around JLo's comeback story (and she is as magnificent as you've heard), we've heard less about Wu, who is equally luminous here. Wu's innocence makes the perfect foil for Lopez's more jaded elder statesman, Jenny from the Block back in the saddle and suffering no fools. It's their relationship that forms the heart of Hustlers  and when Lopez sheds her tough exterior and showcases her vulnerability, the film seemingly takes on a new life. It's a barnburner performance in an uncompromising film, and Wu and Lopez headline a terrific women-led ensemble in a film about a group of exploited workers who've had enough and decide to hit the men who nearly destroyed our economy right where it hurts - in their wallets. It's one of this year's most delightful surprises.