What is there to say about Last Year at Marienbad that hasn't been said? Alain Resnais' fractured 1961 fabled has left critics and audiences scratching their heads for decades, and yet there is something inexorably fascinating about it that keeps drawing them back. 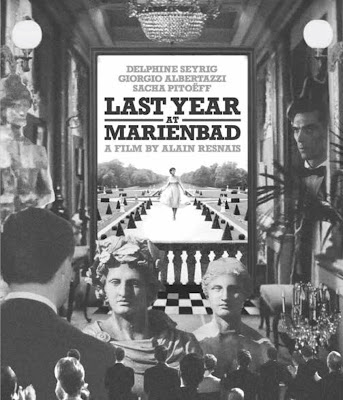 The film doggedly exists in a world that defies explanation - it's a bit of a cinematic Rorschach test, it is everything and nothing at once, a film either pregnant with meaning or no meaning at all, lost in its own singular haze. Trying to analyze it on a thematic level is something of a fool's errand, akin to attempting to ascribe logic to a film like Un Chien Andalou (1929), it will actively defy you at every turn. Instead, one must look at the craft to divine what Resnais is attempting to achieve here.

Set in a lavish chateau in the French countryside, Last Year at Marienbad centers around a never-named man and woman who are trying to negotiate whether or not they had a romantic rendezvous the previous year in Marienbad. The man insists that they have, the woman denies any memory of him. As he describes their encounters, we see the characters acting them out , while Resnais dives deep into a rabbit hole of memory and perception, building layers of action across time and space, until the present becomes completely obscured and the audience becomes lost in his characters haunted reveries.

“Time is unimportant," the man muses at one point, and indeed Resnais seems to reject all fidelity to time as we know it. It's as if he is connecting different conversations from different times and places, taking us inside characters' memories until they become utterly indistinguishable from their present reality. Yet the narrators are often unreliable, describing events that don't line up with the action we're watching on screen. Resnais obscures the truth at every turn until, like time, the truth becomes ultimately beside the point. It is a treatise on memory and longing, of ideas lost to the fog of time, shards of dreams scattered across a marble floor. Resnais would tackle time again several years later in Je T'aime, Je T'aime (1968), much as he did the mysteries of romantic connection in Hiroshima, Mon Amour (1959) several years earlier. Yet Last Year at Marienbad plays like some sort of dreamlike union between the two, unconcerned with the feelings at its core and zeroing in on the singular obsession of discovering the truth from imperfect memories. The characters never get the real truth, and neither does the audience, the pleasure (or perhaps the madness) is in the pursuit.

The new 4K restoration on the Kino Blu-Ray is spectacular, the shimmering black and white images are pristinely rendered, giving the film a disarmingly modern appearance. I can't compare it with the original (now out-of-print) Criterion Blu-Ray, but I can't imagine any picture more remarkably clear. It's a breathtaking treatment of a Resnais' devious house of mirrors, a treatise on splintered memory that endures not just because of its beauty, but because of the haunting mystery at its center that still has no answer.