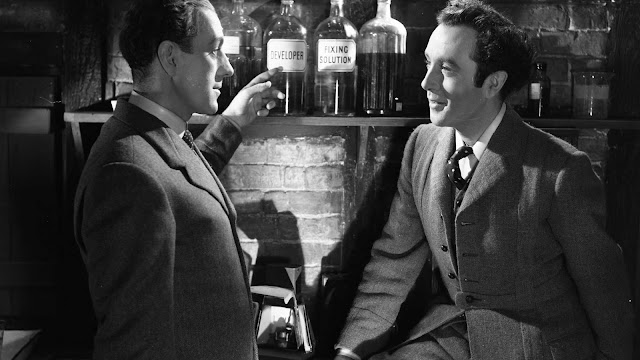 Robert Hamer's Kind Hearts and Coronets, perhaps the most famous film to emerge from Britain's legendary Ealing Studios during its post-war period, is a film so dark and devious that it's almost hard to believe that it was ever approved for an American release under the production code. 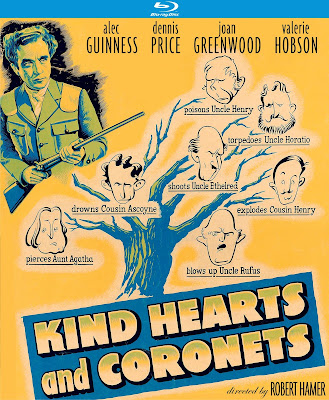 Of course, the American version of the film was given a slightly altered ending (available on the new Kino Blu-Ray) that removed any ambiguity in the fate of its antihero protagonist, Louis Mazzini (Dennis Price), a fallen aristocrat whose mother was cut off from the family in order to deny him his rightful inheritance. After the death of his mother, and her subsequent banishment from the D'Ascoyne family cemetery, Louis toils away in middle class drudgery plotting his revenge, seeking a way to claim the Dukedom he believes was stolen from him.

His solution? Murder the entire D'Ascoyne family by any means necessary, and he begins to pick them off one by one in his quest to become the new Duke, only to find himself entangled in a love triangle between his childhood sweetheart, Sibella (Joan Greenwood), and Edith (Valerie Hobson), the beautiful widow of one one his many victims, which could ultimately prove to be his undoing.

Hamer frames the film from Louis' point of view, who narrates the film as he's writing his memoirs while awaiting execution for a murder that he ironically did not actually commit. This creates something of a sympathetic, if unlikable, protagonist; a serial killer we ultimately find ourselves rooting for. Yet Kind Hearts and Coronets doesn't treat its antagonists, the D'Ascoyne family, as villains. Each one is marvelously played by the incomparable Alec Guinness (who seamlessly inhabits eight roles in all), and while some are utter cads, others such as the young D'Ascoyne cousin who is husband to Edith, and the doddering old priest, are actually decent people. That's where the film zeroes in on the gray areas of its pitch black heart. It is at once a satire of upper crust callousness and the deference shown to the aristocratic class by the proletariat (Louis is to be hanged with a velvet rather than a hemp rope, a fact that impresses the starstruck hangman). It's also an incisive condemnation of the kind of social climbing inherent in the British class system, in which Louis believes that his family connections entitle him to wealth and privilege not afforded to others with "lesser" names.

The title derives from the quotation by Alfred Lord Tennyson, "Tis only noble to be good. Kind hearts are more than coronets, And simple faith more than Norman blood." And yet you'll find no real nobility here, and the only real goodness is quickly destroyed in the names of imagined nobility, empty titles that signify nothing. Its as scathing a critique of the British upper classes as the cinema has ever given us, disguised as a light comedy with a charming exterior. Its droll narration often stands in stark contrast to the action on screen, giving us an experience that is as funny as it is deeply unnerving, a blazing indictment of unearned privilege that destroys anyone who dare step outside their station.