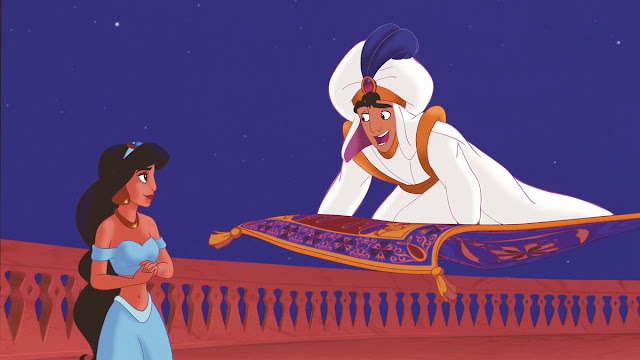 Revisiting Disney's original animated Aladdin after having so recently seen their ill-conceived but undeniably popular live action remake, makes the excellence of the first film stand out and the miscalculation of the new one seem all the more egregious. 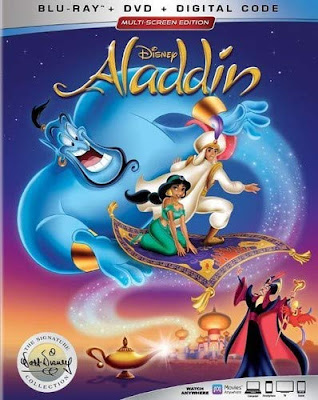 Aladdin has long felt like something of a neglected stepchild amongst the Disney Renaissance films of the 1990s, sandwiched between Beauty and the Beast and The Lion King, it never seems to have claimed the same nostalgic embrace from my generation that those films have.  This despite the fact that it contains some of Disney's most memorable songs (which Disney continues to capitalize on at its theme parks) and one iconic performance by the legendary Robin Williams.

Williams is the heart and soul of Aladdin  of course, and his presence was sorely missed in the 2019 remake, although it had much larger problems than that. It's incredible just how much of his performance was improvised, with the filmmakers setting up a microphone in front of him and letting him riff. The rest of the story, about a young street rat who discovers a genie in a lamp and wishes to become a prince in order to woo the princess, is suitably filled with magic and wonder, and Jafar (Jonathan Freeman) is one of Disney's most indelible villains, a devious vizier willing to do anything to usurp power in the fictional middle eastern kingdom of Agrabah.

The film marked the final collaboration between composer Alan Menken and lyricist Howard Ashman, who passed away before the film was completed. And yet "A Whole New World" and "Friend Like Me" have entered the classic Disney playbook and become mainstays in the popular lexicon, cementing the film's place as one of Disney's best animated films. It is, mostly thanks to Williams (along with Gilbert Gottfried as Jafar's feathered sidekick, Iago), easily their funniest; Williams' never-ending stream of impersonations and wacky characters are so consistently hilarious that the audience barely has time to breathe between belly laughs. And yet, Menken and Ashman imbue the story with a sweeping sense of timeless romance and magic. There's a real sense of wonder in mystical conjurings of Aladdin, something the rote retelling in the remake sorely lacks. There remains a lot to like here, and the new Signature Collection Blu-Ray presentation arrives just in time to overshadow the simultaneous home-video release of its remake. Do yourself a favor - pick up the original instead. It's even better than you remember.