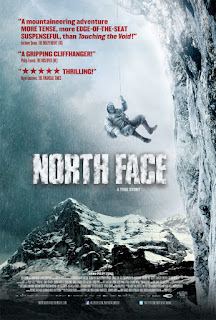 For anyone who has ever seen Kevin Macdonald's excellent 2004 documentary, Touching the Void, the dangers and inherent suspense of mountain climbing are well known. Touching the Void was an ingenious mix of documentary and narrative film, mixing interviews with the subjects and filmed re-enactments of their ordeal to create a truly gripping film experience.

Philipp Stölzl's North Face takes a more traditional approach to a similar tale. Set in 1936, North Face tells the story of two teams of mountain climbers, one German, one Austrian, who set out to conquer the supposedly unconquerable north face of Switzerland's Eiger Mountain. In the days before the Berlin Olympics, the Nazis seek a symbolic victory over Austria, and turns to Toni Kurz (Benno Fürmann) and Andi Hinterstoisser (Florian Lukas), two young, free spirited soldiers who would rather be shirking curfew and climbing mountains than serving in the army.

Jumping at the chance to become the first to ever reach the summit of the Eiger, even after so many men had lost their lives trying, Toni and Andi travel to Switzerland to face off against teams from around the world to claim the victory. Their closest competition is a pair of crackerjack climbers from Austria, who are determined to keep the Germans from claiming the mountain first, and keep close tabs on them on the ascent up the mountain.

Also along for the ride is Luise Fellner (Johanna Wokalek), a photojournalist with eyes for Toni, who accompanies her boss, a newspaper reporter, to the mountain to document the climb. As the eyes of the world watch from below, the two teams race to the top of one of the deadliest mountains in the world over sheer faces of ice and rock. But as the weather takes a turn for the worse, and the climbers find themselves in increasingly hostile environment, it no longer becomes a quest for personal and national glory, but a fight for survival. 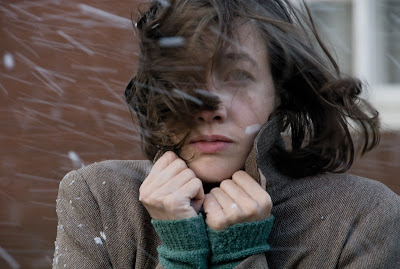 It's a harrowing real life adventure tale, and Stölzl imbues it with a riveting sense of urgency and historical weight. With sweeping, moody cinematography and an ominous score by Christian Kolonovits, Stölzl ratchets up the tension from the start and never lets up. The film is a slow burner, and all the more effective for it. Nearly half the film is spent on setting up the fateful ascent, creating suspense simply by anticipation. The audience knows what's at stake from the very beginning (an old UFA newsreel informs us of past tragedies on Eiger Mountain), and is on edge even before Toni and Andi begin their climb. In fact, the Eiger itself is almost its own character, looming over the film like the great bloodthirsty ogre that is its namesake. Its shadow extends over the entire film, and even when it is not onscreen, its presence is keenly felt.

North Face is the kind of period adventure film that many seem to have forgotten how to do. The period trappings never get in the way of its strong story, and Stölzl keeps the focus intimate and engaging, if occasionally a tad melodramatic. This is gripping stuff, a tautly directed, white knuckle suspense yarn with a keen sense of time and place. It puts the audience in the face of danger, and doesn't blink.

Anonymous said…
Thanks for the review. This film is coming to a theater not far from me next month, and I was trying to decide whether I wanted to go see it or not. Your review makes it seem worth the trip. I hope I'm able to catch it when I can.
9:11 PM

Matthew Lucas said…
I hope you enjoy it. I definitely recommend it.
9:12 PM

We've browsed through your reviews and thought that they are really original and interesting! We would like to invite you to publish your reviews on 7tavern.com, which provides an alternative platform for promising movie reviewers to showcase their talents. In addition, you'll find a growing community of bloggers who share the same passion for excellent movies! Based on the merit of your reviews, we intend to offer you exclusive publishing privileges on our website!