On February 19th, two films by two venerable directors who blossomed during the 1960s and 70s and went on to long and successful careers were released - Martin Scorsese's Shutter Island and Roman Polanski's The Ghost Writer. 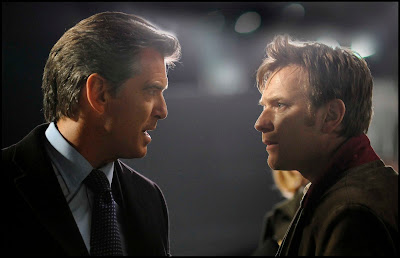 Scorsese's is a slick genre exercise, complete with lots of special effects and red herrings to create an audience mind game hearkening back to the likes of Hitchcock's Vertigo, while Polanski's is also a throwback of sorts, an old fashioned paranoid political thriller that he finished editing from his Swiss jail cell.

One of these films works, and well...one doesn't. In the battle of the old cinematic lions, Polanski comes out on top. By a mile.

I've pretty well made my thoughts on Shutter Island known and why I feel it doesn't really come together, but after seeing The Ghost Writer tonight, those problems seemed even more glaring.

Both films are thrillers that rely heavily on atmosphere. The difference is that Shutter Island seems forced, overly calculated, and artificial. Part of that was on purpose, but it often seemed antithetical to the needs of the story. In The Ghost Writer's case, the atmosphere comes much more naturally. For its entire running time, you never feel like you are anywhere but in the hands of a master. So assured and so pitch perfect is Polanski's direction that he has created a completely immersive viewing experience, whereas Scorsese's seems to hold the audience at arm's length. The fakery of Shutter Island is no match for Polanski's streamlined, no nonsense storytelling aesthetics, creating the suspense without feeling the need to hammer the audience on the head with obviously foreboding cues.

Naturally, Shutter Island is raking in big box office returns while The Ghost Writer has stayed in limited release. And while I have great respect for both filmmakers, in this case, Polanski is the one who delivered the goods.
Email Post

Hal said…
This is motivating me to get out and see Ghost Writer now. Well done.
3:25 AM