Review: "The Sun Behind the Clouds" 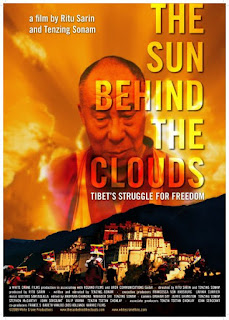 The struggle for Tibetan freedom is one that has gained quite a bit of popularity in recent years, especially when the movement gained greater international attention during protests in the lead up to the 2008 Beijing Olympics. Yet beyond hipsters plastering "Free Tibet" bumper stickers on their cars, the cause has largely remained a distant and abstract one for most Americans.

The face of the movement has always been the Dalai Lama, who fled Tibet in 1959, during which the citizens revolted against the Chinese occupation. Living in exile ever since, the Dalai Lama has been an international symbol of peace and pacifism, but he has also been a man without a country. For the people of Tibet he is a spiritual leader and a beacon of hope. And for those who seek Tibetan independence, he is the ultimate symbol of the plight of the Tibetan people.

Surprisingly enough, however, the Dalai Lama does not support Tibetan independence. He supports what he calls the "Middle Way," a compromise that would allow Tibet autonomy while still under Chinese control. 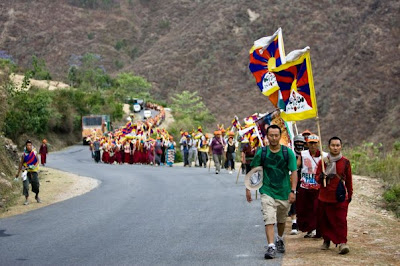 That issue and more is explored in great detail in Ritu Sarin and Tenzing Sonam's new documentary, The Sun Behind the Clouds, which explores the history of the Tibetan struggle for freedom. Using a peaceful, yet controversial march from India to Tibet as a backdrop with which to frame their story, Sarin and Sonam examine the intricacies of the issues facing Tibetans today, including the desire for independence by the younger generation, standing in stark contrast to the Dalai Lama's pacifist Middle Way. While many cannot reconcile their reverence for the Dalai Lama and his philosophies with their own desire for independence, many wonder if his need to provide an answer that coincides with Buddhist teachings is hindering his ability to make the correct political decision as the leader of the Tibetan people.

It is, in many ways, a clash of the generations, where religion and politics collide. Sarin and Sonam use candid interviews with Tibetan activists and historians from all over the world, as well as an extended interview with the Dalai Lama himself, to examine the history of the struggle and the current inner conflicts in a very personal and intimate way. The filmmakers have a clear understanding of the complexities of the issue, and they present them in a very clear and concise manner, making the film easily accessible even to those unfamiliar with the cause. 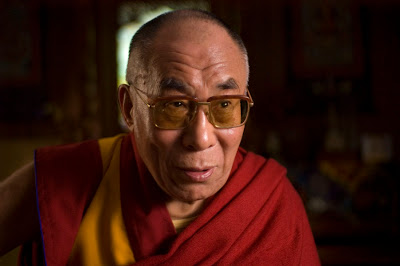 Structurally, The Sun Behind the Clouds is pretty straightforward, often feeling like it may feel more at home on PBS than in cinemas. But the goal here is to spread the word, and if playing this film in theaters brings the cause home to more people, then it has done its job. It is a movement facing a crossroads, as the Dalai Lama ages (he is currently 75), Tibetans are beginning to think about a time when His Holiness will no longer be with them. Will the legacy he leaves be the Middle Way, which many see as a toothless capitulation to the Chinese, and still others see as the best spiritual way, or will it be one of independence to inspire future generations, to be carried on by his successor?

There are no answers here. Sarin and Sonam merely provide the questions. While it is clear both support Tibetan independence, they leave the how up the audience. While it feels more like a historical document and journalistic cultural study than a passionate call to action, The Sun Behind the Clouds is a rare peek at a struggle whose true ins and outs are still unknown to many, and with a film like this to illuminate, it may just open some eyes as well.

THE SUN BEHIND THE CLOUDS; Directed by Ritu Sarin and Tenzing Sonam; Not Rated; Opens Wednesday, March 31, at the Film Forum in NYC.
Email Post