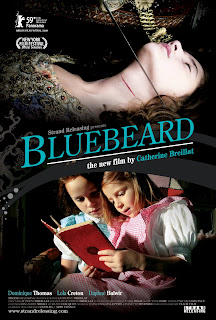 Catherine Breillat's Bluebeard is not your average fairy tale. Unlike many of the sanitized versions of fairy tales that American audiences are used to, neutered of their violent, sexual underpinnings, Bluebeard is a film steeped in the dark, gruesome sexual politics that so often permeated the world of fairy tales.

For US audiences, such Gothic frankness may be shocking in this sort of story, based on the classic French fairy tale by Charles Perrault. But Breillat pulls no punches, and plunges us right into the depths of a grisly nightmare as seen through the eyes of children.

Breillat frames the story with two little girls, Catherine (Marilou Lopes-Benites) and her older sister, Anne (Daphné Baiwir), reading Perrault's tale in a dark and musty attic. Catherine, takes great pleasure in scaring her older sister, drawing out and relishing in every gory detail for maximum effect as she reads the book aloud.

Dominique Thomas, Lola Creton, in Catherine Breillat's BLUEBEARD
Photo courtesy of Strand Releasing
The two girls are based on Breillat herself and her own sister, who used to relish the tale of Bluebeard in similar fashion when they were children, and she realizes the story as it might be imagined by a child, filtering it through the lens of their own experience, as a way of inserting themselves into the story. The heroine's name is Marie-Catherine (Lola Créton), and she lives the life of a peasant in the medieval French countryside with her mother and older sister. Together they live in the shadow of the castle of the notorious Bluebeard (Dominique Thomas), an aristocrat with the reputation for marrying young women and then killing them in short order.

When word gets out that Bluebeard is seeking a new wife, families from all over turn up to try to marry their daughters away to a wealthy lord, thereby assuring their own financial security. Marie-Catherine's family, deep in debt after the death of their father and living in poverty, decides to present Bluebeard with their eldest daughter, Marie-Anne (Lola Giovannetti). But it is Marie-Catherine who catches his eye, and soon she finds herself married and living in his cold, cavernous castle. Determined to be the wife that finally tames the savage beast, Marie-Catherine uses her youth and beauty to her advantage, holding Bluebeard at bay and charming him with her innocence and devotion, and soon begins to wonder if the rumors were even true. But she soon learns the truth, and it takes every bit of her feminine cunning to try to outsmart the murderous Bluebeard.
Daphne Baiwir, Marilou Lopes-Benites, in Catherine Breillat's BLUEBEARD
Photo courtesy of Strand Releasing
Unsurprisingly, Bluebeard is ultimately a tale of female empowerment, a common theme among Breillat's work. It is a twisted fairy tale with a feminist edge, channeling Breillat's own childhood dreams and fears into a deeply personal and modern take on a well known story. The costumes and sets almost feel like children playing dress up from ornately gaudy costumes found in an old trunk, very much rooted in the mentality of a little girl's fantasy. Breillat's goal is to tap into the frightened child in all of us, gleefully devouring scary stories in the dark under the covers, or huddled in the corner of a dusty attic, willfully scaring ourselves silly. And in that regard she succeeds. But she has also crafted a film of great and tremulous beauty. Bluebeard is a breathless whisper, a haunting and wholly satisfying journey into the heart of human darkness as filtered through a child's eyes, in all its larger than life fearsomeness.

Breillat has breathed life into an enchanting feminist fairy tale for a modern age, at once wistful and nostalgic, and eerily macabre. Its distillation of her childhood fantasies mixed with her own adult sensibilities makes for something both magical and frightening. It is an engaging, layered fairy tale; a beautiful gilded dagger of a film - lavish in its appointments, that cuts straight to the bone.

Sam Juliano said…
I laughingly remember how I went to the mat with you two years ago over Ms.Breillat's THE LAST MISTRESS (which I loved and you didn't) but with BLUEBEARD we are in complete agreement. Exceptional descriptive essay here that conveys its artistic allure, and yes Breillat pulls no punches. The IFC Film Center audience at the midnight show I saw over the weekend were seemingly spellbound, without the slightest hint of fatigue, which does tell you something. I went with 4.5 of 5, which is basically on par with your own rating.
11:43 AM

Matthew Lucas said…
I may revisit THE LAST MISTRESS at some point. But I do not have fond memories of it at all. And I still haven't quite forgiven Asia Argento for the double whammy of that and MOTHER OF TEARS (which, I'll grant you, is MUCH worse) in the same year, haha.

FAT GIRL is showing free at The Auteurs right now, so I will probably try to see that at some point as well.

I just found this one enchanting. I loved the atmosphere of the whole thing. Glad you enjoyed it as well.
6:18 AM