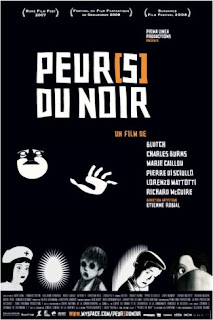 Well it's time for horror fans to rejoice, because now we have something completely different.
It's refreshing, after spending lots of blog and newspaper space bemoaning the death of originality in the face of Role Models, to sit down and watch something as new and stunningly original as the animated French horror anthology, Fear(s) of the Dark.
Fans of the gory side of horror may not warm up to Fear(s) of the Dark, and while the film (unlike so many horror films today) relies more on atmosphere and mood than blood and guts, this still isn't a pleasant wade into the kiddie pool, because the filmmakers behind this little gem aren't kidding around.
Concieved and created by six of the world's most respected graphic artists, Fear(s) of the Dark is an omnibus film unlike anything we have seen before. Unlike similar recent efforts such as Paris, Je T'aime and Chacun son Cinema, Fear(s) of the Dark takes its six segments and tells them in a non-linear, non-consecutive way, mixing them up for a more cohesive, more compelling experience. 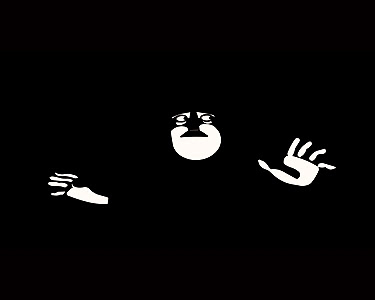 Hand drawn in stunning black and white, each segment deals with innate human fears, be they as common and as deep seeded as a fear of the dark, or as mundane as the fear of offending someone different from you. They range from conventional narrative to avant-garde, from linear to surreal, each with a wholly unique take on its subject. There's the unnerving tale of the mysterious man seemingly hellbent on murdering everyone he encounters with his vicious dogs; the tale of a lonely young man whose encounter with a strange insect will change his life forever; a young girl's terrifying dreams that begin to manifest themselves after she moves to a new home; a boy whose odd friend seems to have a acute connection to a series of sinister disappearances; and a man's journey through his possibly haunted house.
Interspersed throughout the film are a series of bizarre ruminations by a woman who is seemingly afraid of everything, accompanied by swirling images that seem to have jumped out of a Dadaist short from the early part of the 20th century. With such a potentially scattershot nature one would expect Fear(s) of the Dark to fail in capturing a sustainable mood that is so integral to horror, but that is not the case at all. Each segment has its own rhythm and its own atmosphere, but a constant cloud of dread hangs over the entire film. 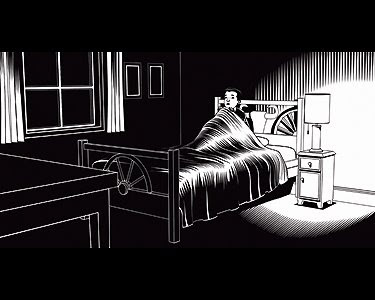 The directors understand the nature of fear, and drill right to the center of it, crawling underneath the skin of the audience with an almost unparalelled aplomb. You don't find this kind of creeping dread, this acute sense of danger mixed with an eerie, haunting beauty. The artists' mastery of light and shadow as well as dramatic tension make for a compelling, at times transfixing experience.

You won't find the typical "gotcha" style of scares here. What Fear(s) of the Dark achieves is much more subtle and elegant. It taps into something primal in human nature, something that makes the hair on the back of the neck stand up and shivers run down the spine. It has an effect not unlike that of scary stories told in the dark around a campfire, where the imagination creates something far worse than any special effects can ever make, where the eye plays tricks on the mind and things go bump in the night, and where few movies ever succeed, or even dare to go.

Anonymous said…
Yup, would definitely like to see this some day. Sounds spooky, but in the good way, the way I love.
7:41 AM

Anonymous said…
Now here is a outstanding review--so beautifully composed and organized. I would love to see this film, and actually had it as a possibility for tonite, but I see SLUMDOG MILLIONAIRE is at the Angelika, so I may opt for that. But this horror omnibus has had a good run at the IFC.

My favorite sentences of your review, all of which really tell the whole story here are:

"The artists' mastery of light and shadow as well as dramatic tension make for a compelling, at times transfixing experience."

"It taps into something primal in human nature/something that makes the hair on the back of the neck stand up, and shivers run down the spine."

"The directors understand the nature of fear, and drill right to the center of it, crawling underneath the skin of the audience, with an almost unparalleled aplomb."

Matthew Lucas said…
I'm not sure I deserve such high praise Sam, but thank you very much. It's quite a good film and definitely worth watching, but I wouldn't chose it over SLUMDOG MILLIONAIRE. Sounds like you made the right choice.

Nicky, it most definitely is spooky in the best way. I just wish I had seen it back during the Halloween season. It would have been perfect!
10:12 PM